At noon, Tuesday, Oct. 4, 1791, an army of about 2,300 apprehensive men marched out of Fort Hamilton into the uncharted wilderness with a twofold mission. First, they were to erect a fort at the juncture of the St. Mary and St. Joseph rivers (present-day Fort Wayne, Ind. ). The army also was to build intermediate outposts as it moved from Fort Washington (Cincinnati), its starting point.

Fort Hamilton -- only about 50 yards square -- was the first in that chain of forts. It had been completed only a few days earlier, just in time to host Gen. Arthur St. Clair's hurriedly-assembled force.

The army's prime objective was to make peace with the Indians, who had been violently opposing settlement north from the Ohio River in the Northwest Territory. If the Miami, Shawnee and other tribes weren't agreeable to a peace arrangement, then St. Clair was authorized to use force against the Indians. A fight was likely.

Most of the men were poorly-trained militia. Only 600 were regulars, whose training and experience were diminished by circumstances beyond their control.

The army's shortcomings and handicaps were quickly evident as it began its month-long, 80-mile advance to a Nov. 4 meeting with the Native Americans.

The Oct. 4 start from Fort Hamilton -- at noon instead of morning -- was because of "some deficiencies of pack horses," noted Col. Winthrop Sargent, adjutant general, in his diary.

Sargent said the army covered three miles that day, but other accounts estimate it at one to two miles. Its camp the night of Oct. 4 was beside Two Mile Creek in the area of the present-day Hamilton High School, Hamilton West YMCA and McDonald's.

The next day, Oct. 5, it crossed the hill over what is now Eaton Avenue and camped at Four Mile Creek on the other side of the hill.

The night of Oct. 6 it rested beside Seven Mile Creek.

Contributing to the slowness was the recent weather -- wet and cold. Another major factor was the dominant landscape -- heavily timbered with thick undergrowth. That was compounded by the problems of the scarcity of axes and the rapid dulling of those available. Axes were the basic tools for an army which was supposed to be opening a road through the wilderness as it advanced.

Another complication was a lack of information. "We had no guides, not a single person being found in the country who had ever been through it, and both the geography and the topography were utterly unknown," observed St. Clair.

But St. Clair's major handicaps were poorly-disciplined militia and an inefficient supply system.

For example, St. Clair discovered Oct. 8 -- only four days out of Fort Hamilton -- that there weren't enough rations stored at Fort Hamilton to feed his army, despite previous assurances from the quartermaster and a supply contractor's agent.

Shortcuts in recruiting and lack of time for training worsened the discipline problem and, as the army advanced, desertions increased.

In desperation, St. Clair sent his best troops, the First Regiment of regulars, back toward forts Washington and Hamilton to expedite supplies and to capture deserters.

The outcome of the campaign (which will be the subject of a future column) was failure.

But some of the lasting byproducts of St. Glair's ill-fated march are names on Butler County's geography. The soldiers gave some of the streams they crossed names corresponding to the distance from Fort Hamilton -- such as Two Nile, Four Mile and Seven Mile.

The failure of the frontier army associated with the building of Fort Hamilton nearly 200 years ago remains one of the darkest chapters in U. S. military history.

The 1791 army was led by Major-Gen. Arthur St. Clair from its base at Fort Washington in Cincinnati, his army moved northwest against hostile Native Americans. Part of his plan was to build a series of forts extending into Indian country. The first was Fort Hamilton, completed in September 1791.

St. Clair's 2,300-man army -- including only 600 regulars -- spent little time at Fort Hamilton before continuing into the thickly-wooded wilderness.

The hastily-assembled army -- short on both training and supplies -- left Fort Hamilton at noon, Tuesday, Oct. 4, 1791, heading for a showdown with the Indians.

Eight days before the encounter, Col. Winthrop Sargent, adjutant general of the army, had noted in his diary that "our prospects are gloomy." He accurately surmised that its supply, transportation and desertion problems "may make events fatal to the whole army."

At the headwaters of the Wabash River, the army encountered a Native American force including Miami, Shawnee, Wyandot, Ottawa, Chippewa, Delaware and Potawatomi braves. Later, St. Clair contended that "we were overpowered by numbers." Other reports say the opponents were about equal.

The night of Nov. 3-4 the soldiers were told to lay upon their weapons while they slept. But Sargent said "the encampment, very defensible against regular troops, was found . . . to be feeble to an Indian attack."

A light snow covered the ground when the Indians -- under the able leadership of Little Turtle, a Miami chief -- attacked at about 6 a.m.

St. Clair was in no condition to command an army. Because of gout, he was "unable to move without excruciating pain" and "remained in bed, undressed" at the time of attack, noted Wiley Sword in a recent book, President Washington's Indian War.

St. Clair eventually responded, and during the battle had four horses killed under him.

Meanwhile, by design or coincidence, the Indians nearly eliminated St. Clair's officer corps early in the fight. According to one report, there were 52 officers on the field and 46 became casualties, including 39 killed and seven wounded.

The battle -- which soon swung in favor of the Indians -- continued for about three hours before a retreat was ordered. St. Clair said "the retreat . . . was, you may be sure, a very precipitate one. It was, in fact, a flight."

"The fortunes of this day have been as the cruelest tempest to the interests of the country and this army, and will blacken a full page in the future annals of America," Sargent said.

Most accounts place St. Clair's total losses at about 680 dead and about 270 wounded, a total of about 950 casualties. The Indians are believed to have lost between 50 and 150 men.

It had taken the army a month -- Oct. 4 to Nov. 4 -- to march about 80 miles from Fort Hamilton to the battle site. But it took some of the survivors only two days to retrace their steps to Fort Hamilton.

Wiley Sword, in his 1985 book, said of the 1791 campaign that "there never had been, nor has there been since, such a disaster at the hands of hostile Indians."

"In fact, St. Clair's defeat remains one of the worst defeats of a major United States army at the hands of Indians, dwarfing even the Custer debacle on the Little Big Horn in 1876," said Sword.

​
EditHamilton started as Fort Hamilton (named to honor Alexander Hamilton, first Secretary of the Treasury), constructed in Sept.-Oct. 1791 by General Arthur St. Clair, governor of the Northwest Territory. The fort was the first of several built north from Fort Washington into Indian territory. The fort was built to serve as a supply station for the troops of general Arthur St. Clair during his campaign in the Northwest Indian War.[10] Later it was used by General "Mad" Anthony Wayne. The fort was located 28 miles (45 km) upstream from the mouth of the Great Miami River where the river is shallow during normal flow and easily forded by men, animals and wagons on its gravelly bottom. In 1792 the fort was enlarged with a stable area by General Wayne. The fort was abandoned in 1796 after the signing of the Treaty of Greenville.
A settlement grew up around the fort and was platted as Fairfield in 1794. By 1800, Hamilton was becoming an agricultural and regional trading town. The town was platted, government was seated, and the town named by 1803.
Hamilton is located just north of Cincinnati and was named for America's first Treasury Secretary Alexander Hamilton and whose face is on the $10 bill. Originally, the community was laid out as Fairfield in 1794, but when General Arthur St. Clair began his ill-fated military expedition into the Northwest Territory in search of Native Americans responsible for numerous attacks. St. Clair built a series of forts as he moved north. One of those forts was near Fairfield, and was called Fort Hamilton. The fort was built on the east bank of the Great Miami.
When General St. Clair was defeated near Greenville in Darke county, his army retreated to Fort Hamilton with a loss of over 600 men. Several years later General Anthony Wayne led another expedition through Fort Hamilton. After the Battle of Fallen Timbers many of Wayne's army after it was disbanded, returned to Fort Hamilton and built permanent homes. Fort Hamilton was officially abandoned in the fall of 1795 and the stores sold at public auction. 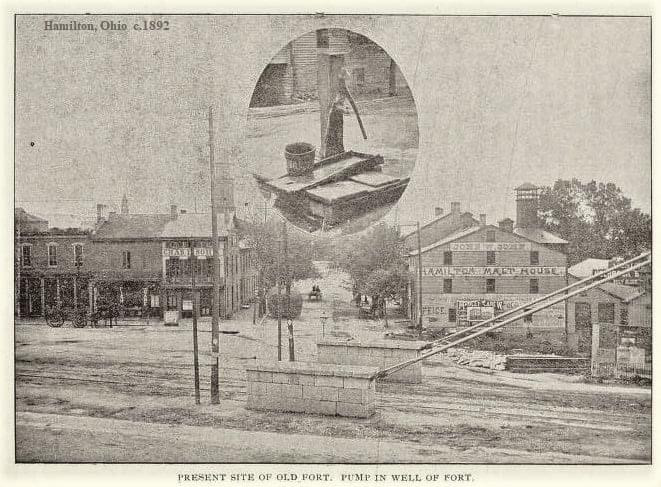