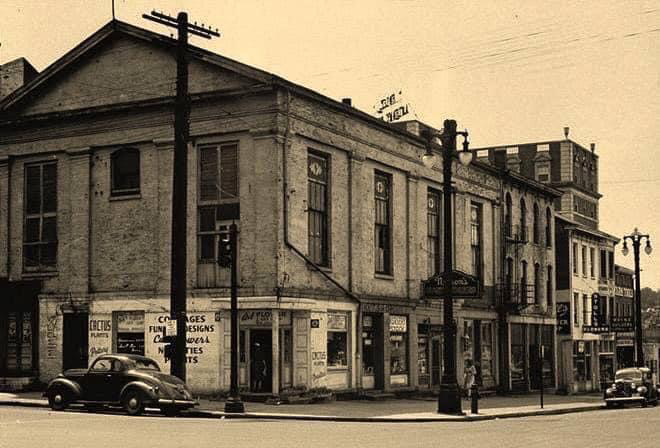 Location: Southwest Corner Of The Intersection Of High And Front Streets

The building was erected sometime between 1846 to 1852 ( conflicting dates are given) by the First Universalist Society of Hamilton and was used for church purposes until 1885.

After the Universalist vacated the building and their worship area becomes a billiard/pool hall known as BUCKEY BILLIARD HALL.

“John Graf will open his new billiard hall this evening.
This hall occupies the room on the second floor in the
old Universalist Church building which has been
entirely remodeled, refitted and beautifully frescoed.
A new floor has been laid, with an elevated platform
all around the room, upon which is placed high cane
seated chairs for spectators.

The large windows afford ample light and
ventilation, and a stationary wash stand and toilet
room gives every convenience that can be desired. On
the main floor is placed three billiard and four pool
tables, and in the gallery above two pool and one
billiard table. All of these are of the latest improved
Brunswick-Balke-Collender make.”

In the 1890s the second floor was the headquarters for the Butler County Cycle Club during the bicycle craze which swept the nation and took place during that decade. Followed by a brief occupancy by Queen Theatre. The second floor also served in later years as a dance hall, armory, and a billiard hall.

The lower floor over the years was occupied by the U. S. Post Office, a jeweler, and a saloon.

In later years one of the billiard establishments was known as THE ROYAL BILLIARD HALL. Known to be in business from 1921-23. Pool game 2 1/2 cents a cue. All other games were at low prices. Also featured was a Wurlitzer organ valued at $2,500.

Until 1931 the building was also the city's out of town bus station. Then the station moved across High Street to the site many of us remember. Now known as Lentil Park. When buses first began running to neighboring communities, the corner of Front and High became their starting point. In time, Lindley Building's ground floor was remodeled into a waiting room and station.

The Lindley Building was demolished about 1940.