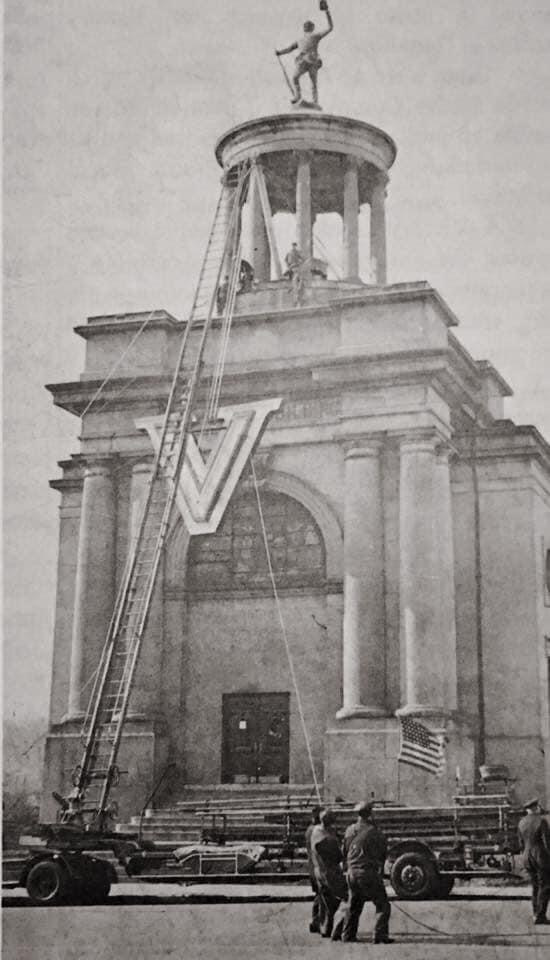 A red-white-and-blue “V” was placed on the Soldiers, Sailors, and Pioneers Monument Thursday, November 12, 1942. “V” for victory.

City crews and firefighters cooperated in hoisting the three-quarter ton sign to the top of the monument where it remained throughout the war.

The huge “V” measured 15 feet high and 16 feet wide. Actually there were two “Vs” The larger “V” in the background had all white lights and the smaller “V” in the foreground contained red and blue lights. 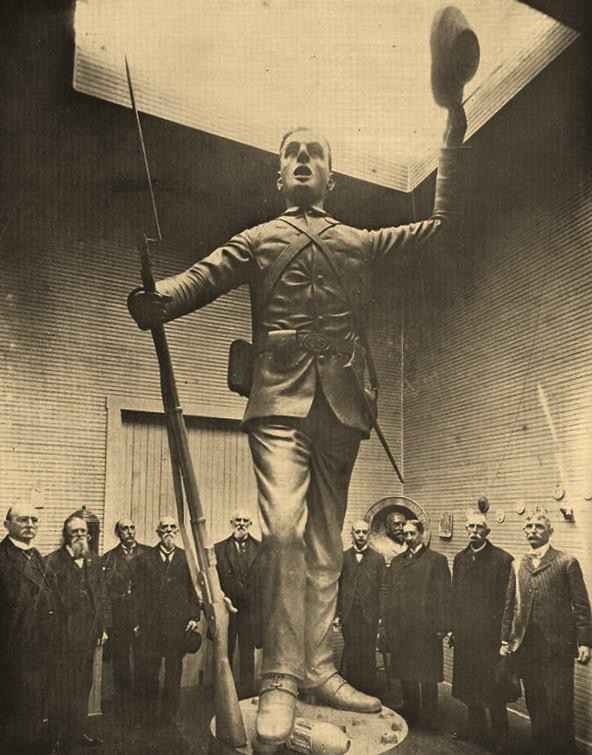 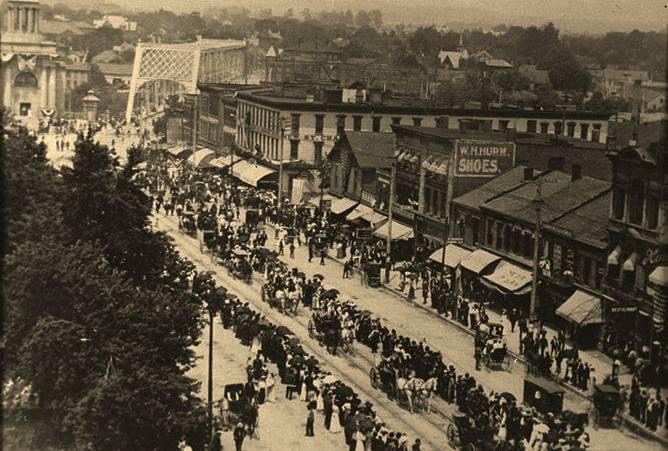 1906 - Parade of July 4th, 1906 for the dedication and opening of the Soldiers & Sailors monument. A nice view of the iron-truss version of the High St bridge is here as well. 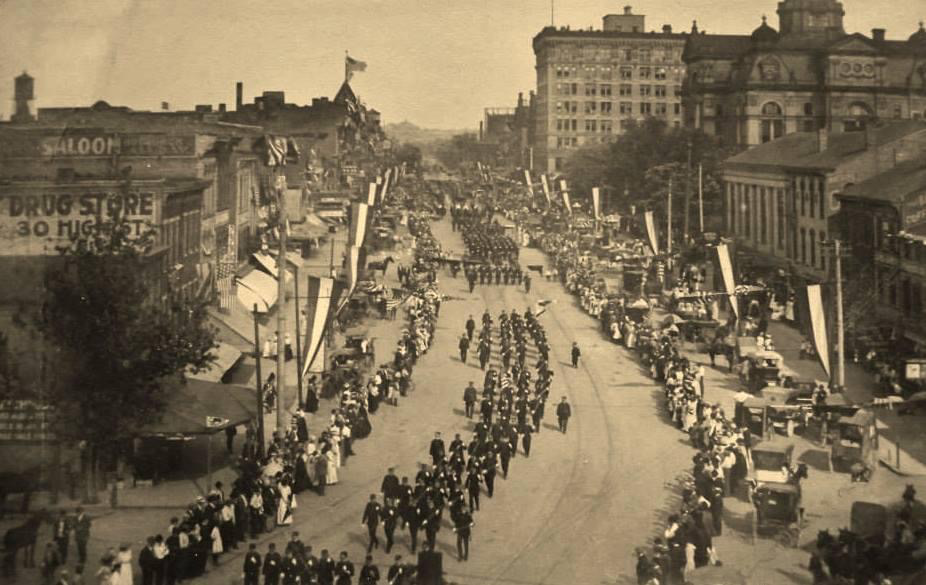 1906 - High St looking east. The parade taking place here marks the dedication and opening of the Soldiers & Sailors monument.
​1. More on the inside. The monument is 100 feet tall and 40 feet square and holds a myriad of uniforms, artifacts of wars like cannons and bayonets, documents, books and other memorabilia dating back to the Civil War. Before the museum closed for repairs people were still bringing uniforms for display.
2. Who is Billy Yank? The bronze soldier atop the structure is Billy Yank, a common name for Union soldiers during the Civil War. Billy's official title is "Victory, the Jewel of the Soul." He is 17 feet tall, weighs more than 3,000 pounds and his foot is resting on an unexploded shell.
​A county-wide tax levy approved by voters Dec. 7, 1899, generated $71,267.25, but the actual cost of the monument was $71,266.73 -- leaving a surplus of 52 cents.
​


The 3,500-pound bronze figure was designed and created by Rudolph Thiem, a German immigrant. He was born in Berlin Oct. 22, 1859, and learned sculpture and model-making in Germany before coming to the United States.

3. Why that spot? The monument was planned and promoted by Butler County Civil War veterans and financed by a county levy in 1899, according to the Ohio History Connection website. The monument is made of Indiana limestone and sits near the center of the site where Fort Hamilton once stood.
PHOTOS: Soldiers, Sailors and Pioneers Monument gets new copper roof4. Fascinating trivia. Former curator Don Schollenbarger gave the Journal-News a tour of the monument before he retired in 2015. He told all kinds of fun facts about the historic treasure. Tidbits included a note that a little cannon in the museum wasn't used as a weapon but as a means of communication between soldiers and the story of the origin of the beautiful stained glass windows.
“One of the unique items is the stained glass windows upstairs, which are to honor the women that served in the Civil War,” the curator said. “It was a very unusual thing for the Civil War veterans to do.”
MORE: Repairs slated for the Soldiers Sailors and Pioneers Monument
5. Billy Yank will live on. The county and Hamilton Community Foundation spent almost $500,000 to make critical repairs to the monument, like installing a new copper dome and waterproofing the many leaks in the building. The Butler County Historical Society will take over curator duties soon and they plan to open the building to the public in May.

(This is the third in a series on Butler County connections to the Mexican War.)

In 1847, in the second year of the Mexican War, President James K. Polk asked Ohio to provide more men to fight in Mexico. The state's quota was 11 companies -- 10 infantry and one cavalry

The call for the "Butler Boys No. 2" was issued April 27 by William P. Young, who became major of the Fourth Ohio Infantry Regiment when it assembled in Cincinnati in June. The volunteer regiment left Cincinnati July 1, 1847, proceeding by steamboat to service on the Rio Grande.

As the new Butler County recruits organized in Hamilton, the "Butler Boys No. 1" -- officially Company I of the First Ohio -- were returning from Mexico. That group, originally led by John B. Weller, had started training in Hamilton in May 1846.

The Fourth Ohio -- although in constant peril -- did little fighting in Mexico. Its service was limited to patrols and guard details, including garrison duty at Matamoras. Other stops included Vera Cruz, Puebla and Atlixco. The regiment was in the vicinity of Mexico City, but didn't participate directly in the Sept. 13-14, 1847, battle in that city.

The soldiers found the Mexican climate and poor sanitary conditions their major enemies. The regiment suffered 76 deaths before being mustered out July 24, 1848. Four men were killed in combat, one died of wounds and 71 were victims of disease. Common ailments included yellow fever, mumps and other illnesses associated with bad drinking water.

Butler County men in the Fourth Ohio "returned home in July 1848 and were enthusiastically received in Cincinnati and this place" [Hamilton], according to the 1882 Butler County history. "A supper was given to the Butler Boys No. 2 on the last Saturday in July" at the Butler House Courthouse. In addition, "citizens of Madison and the adjoining townships met in Miltonville" Saturday, Sept. 9, 1848, to honor the returned soldiers.

Ohio sent about 7,000 men into U. S. land forces, plus additional men in the U. S. Navy. The Buckeyes formed five short-term infantry regiments, 15 companies of independent infantry, one company of mounted infantry and five companies of regular army infantry during the two-year war.

At least 259 Butler Countians -- all volunteers -- served during the Mexican War, according to names inscribed on the walls of the Soldiers, Sailors and Pioneers Monument in Hamilton.

The Mexican War formally ended Feb. 2, 1848, with the signing of the Treaty of Guadalupe Hidalgo. The U. S. Senate, after amendments, ratified the document March 10. The Mexican Congress approved the treaty May 25 and President James K. Polk announced formal ratification July 4, 1848.

Despite the turnout of volunteers, the Mexican War wasn't a popular one in Butler County. At the heart of local opposition was the belief that the war was waged to extend slavery into territory that would be taken from Mexico.

The United States had annexed the Republic of Texas Dec. 29, 1845. Texas had won its independence from Mexico in 1836. But unresolved was the exact boundary between Texas and Mexico. That dispute led to a skirmish in April 1846 that prompted the U. S. to declare war.

Another pre-war difference was the future of California. The Mexicans, suspicious of a future

U. S. annexation attempt, had ordered the expulsion of American settlers from California. Southern U. S. interests coveted California as a future slave state.

Prominent Butler County men were involved in Ohio political events in which the 1846-48 war with Mexico and the possible extension of slavery were critical issues. Details on those statewide contests will be covered in