Funny:
I have a nice detailed art work of the cabin. You can either look directly at the cabin or this. Both are cool. (Then take out coloring book) 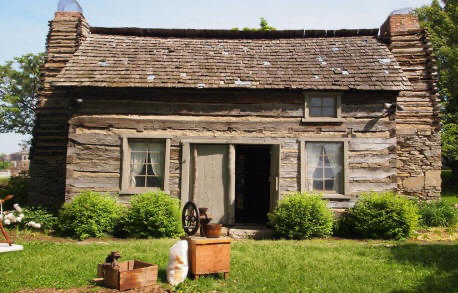 Those are common questions from persons who aren't familiar with the history of the cabin that now stands on land once within the walls of Fort Hamilton, an army outpost in the Northwest Territory during the Indian wars of the 1790s.

The building was not part of the fort built 200 years ago in 1791, and it wasn't erected in Hamilton.

It may have been built as a barn, stable or blacksmith shop instead of a house.

The cabin was discovered at 209 Park Ave. in 1964 when it was about to be destroyed. Thanks to a new owner — who didn't know he had acquired a log cabin — and the efforts of many people and organizations, the building was saved and relocated on public property.

The cabin had 57 owners and hundreds of occupants in about 160 years as a private residence, according to Esther Benzing, who was Butler County archivist in 1964 when the structure was discovered. She also reported it had been involved in three sheriffs sales.

It was believed to have been built before the establishment of Rossville, a village founded in 1804 on the west side of the Great Miami River. Rossville was merged with Hamilton in 1855.

It was uncovered in September 1964 when R. B. "Penny" Hershner was planning to demolish the building to create a parking lot for his adjacent Hershner Realty office at the southwest comer of Part and North C streets.

Hershner donated the four-room cabin — which had been covered with clapboard siding — to the Butler County Park District.

The park district offered the building to the City of Hamilton with county park employees doing the reconstruction. The park district also agreed to accept responsibility for operation and maintenance costs.

In October 1964, Hamilton City Council was unanimous in approving the rebuilding offer on city-owned land south of the monument. The council action also exempted the project from city building codes.

Thomas B. Rentschler and Walter Rentschler of the Citizens Bank led the way in financing its dismantling, moving and reconstruction at the Monument Avenue site.

The cabin's stone fireplace and stone chimney were built through the cooperation of cement and concrete manufacturers, suppliers, contractors and masonry apprentices.

Despite the cabin's age, a 1964 report said "weather and people have left it virtually unmarked, except for slight black fire scars on the outside of the rear part of the building.

The same article said "a walnut and poplar wall was constructed sometime after the cabin was constructed, dividing the building into as many as four rooms — two down and two up — with a small loft overhead.

"The cabin proper, a brilliant piece of wood craftsmanship, was originally constructed without a nail being used in the building of the four walls," noted the newspaper report.

The relocated cabin was dedicated Friday afternoon, Dec. 18, 1964, in a program led by George Cummins, Hamilton lawyer and historian who was chairman of the Butler County Historical Society's cabin restoration committee.

Other participants included Mayor Thomas Kindness; William R. Stitsinger, president of the Butler County commissioners; William Huxster, secretary-treasurer of Hamilton Area Unit Masonry Inc.; William K. Baldridge, president of the Butler County Historical Society; M. David Urmston, chairman of the park district; others who helped in the project and representatives of families that had resided in the building. 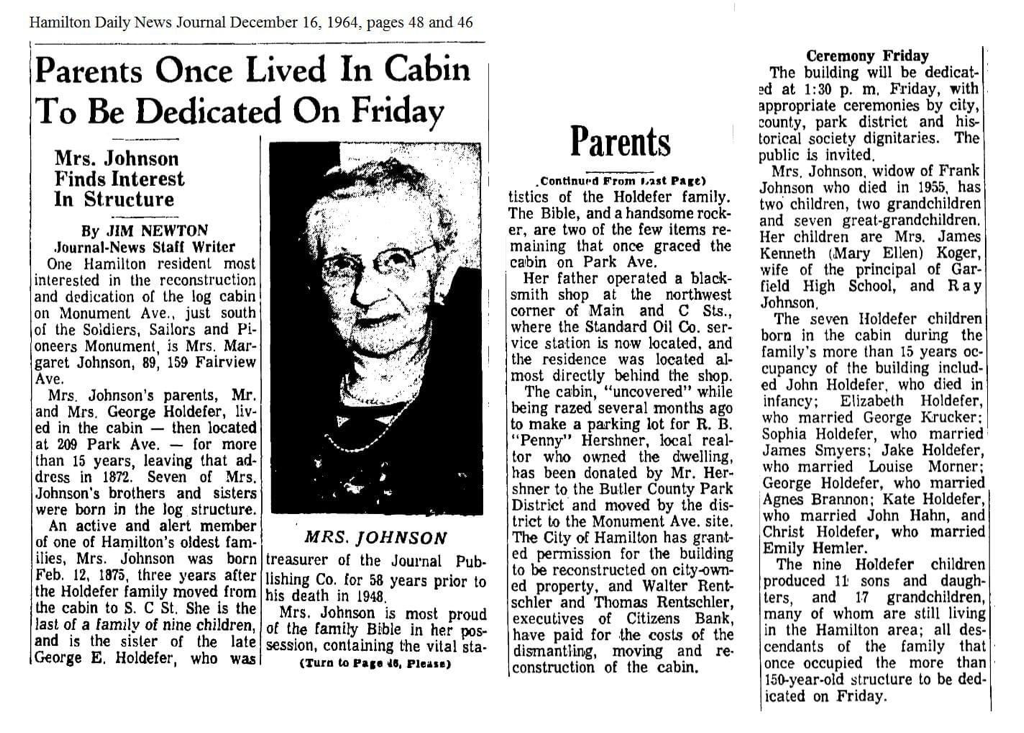