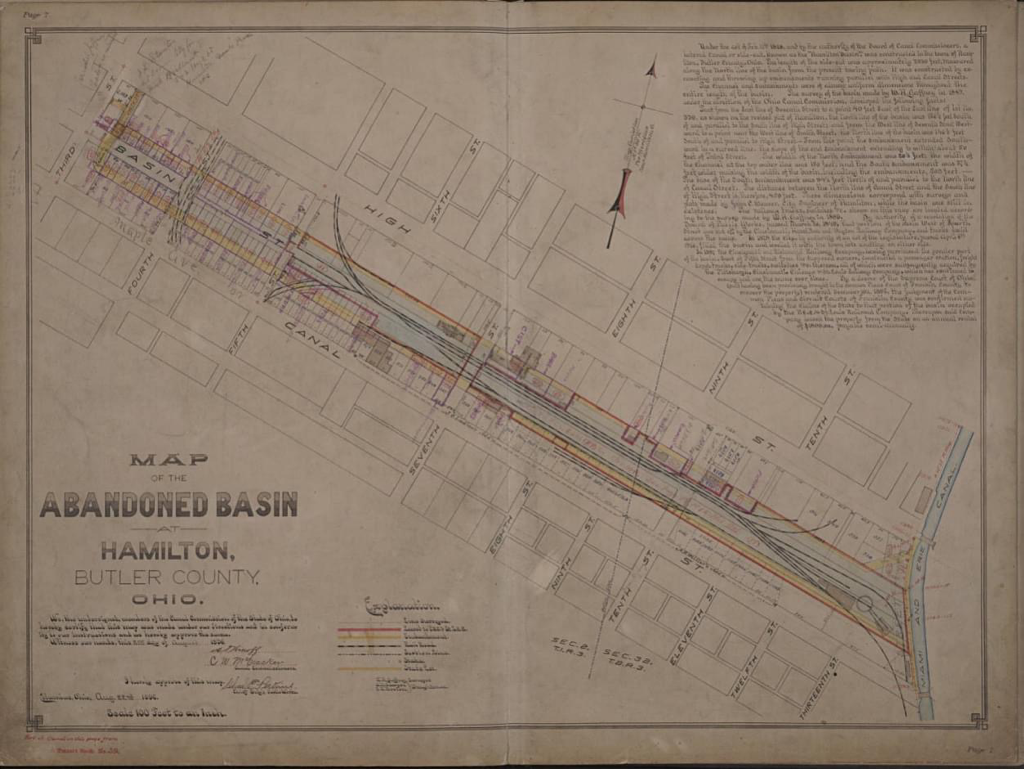 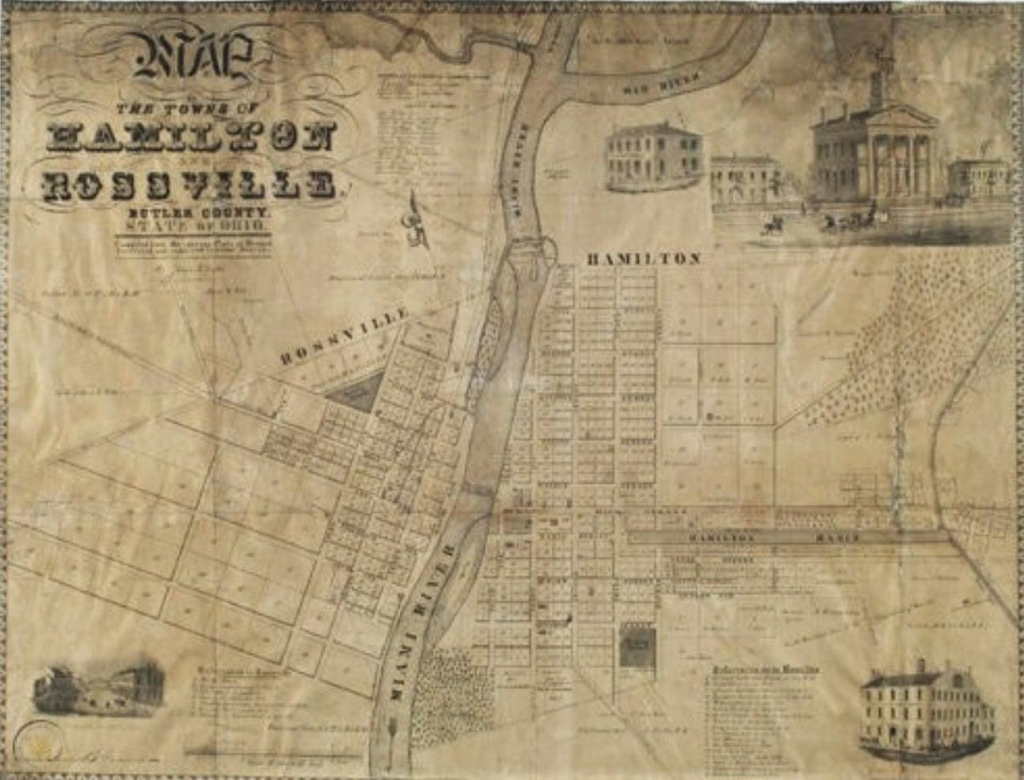 The Hamilton Basin was Hamilton's connection to the Miami-Erie Canal. When canal construction started at Middletown on July 21, 1825, its proposed route was about a mile east of Hamilton. Faced with the prospect of their town losing the advantages of being a commerical and transportation center, Hamilton leaders appealed to Ohio officials to change the route. At the same time, a new town was planned on the canal at the present intersection of Erie Highway and High Street. In December 1827 Robert B. Millikin, John Reily, Thomas Blair, and Jesse Corwin, representing Hamilton and Rossville, persuaded state leaders to authorize a sidecut canal into Hamilton. This became the Hamilton Basin, financed mostly by local donations.​The Basin left the canal half a mile or so to the eastward, and stretched down into Hamilton, a sheet of smooth water, 15 or 20 feet deep, and a hundred wide.

On today's city map, the basin would be on the railroad right-of-way between High Street and Maple Avenue. In its original form, it stretched from South Third and Court streets to Erie Highway,

However romantic this sounds, in the later years of the canal the basin faced problems.
For example, the Hamilton Basin was frozen from Dec. 19, 1330, until March 4, 1831, preventing entry to canalboats. Spring rains frequently washed away embankments while summer droughts created a shortage of canal water. The leaking basin periodically flooded Hamilton streets and buildings.
In its declining years, health problems related to the basin were constant and aroused public sentiment for its removal. Stagnant basin water became a breeding pond for flies and insects and a collection place for garbage. The Badin was filled in in 1877. 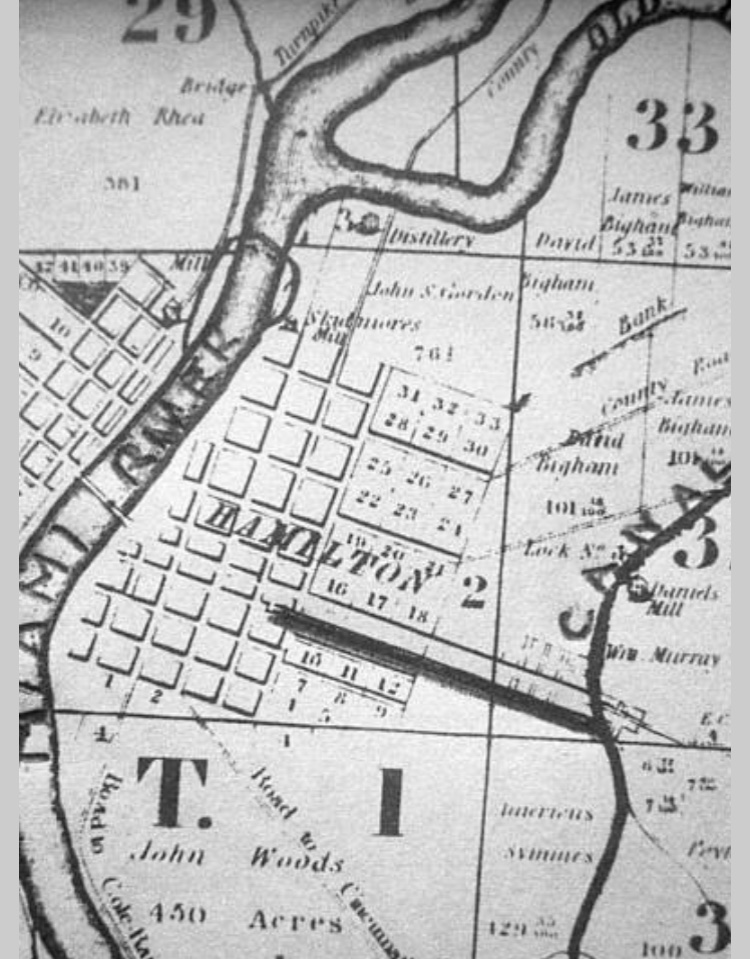 Natural ice was a major business employing hundreds of people in the Hamilton area for several decades. Icehouses -- which stored the perishable winter product for later distribution -- were built along canals and other waterways.

The combined storage capacity of Butler County icehouses reached 265,000 tons in December 1884. That year, 17 companies operated icehouses along the Miami-Erie Canal between LeSourdsville in Lemon Township and Port Union in Union Township.

By 1911, when artificial ice dominated the industry, at least 11 ice-producing ponds still operated within 10 miles of Hamilton.

"The natural ice industry was a highly profitable one if the winter season was cold, but if the winter was mild, it was a highly precarious one," a 1911 report said. "If all the conditions were right, ice could be harvested for as low as 25 cents per ton," and sold at $2 a ton.

Much of the local natural ice went by canal and railroad to breweries, meat packers and dairies in Cincinnati. One local ice company, which owned six canalboats, reported paying $30,000 in canal tolls in 1882.

Pressure from ice producers and consumers prolonged the life of the canal system for several decades after railroads had captured the bulk of the passenger and freight hauling business.

William Cullen, a Scottish scientist, developed the principles of artificial refrigeration in 1748. Ferdinand Carre, a Frenchman, invented refrigeration by compression in 1857. But the first commercial household refrigerator wasn't available until 1913.

Many Butler County residences and businesses relied on iceboxes to cool food and drinks through the Depression years. Until the early 1900s, they were stocked with locally-produced natural ice, most of it from specially-built ponds.

Other sources included two reservoirs just north of Hamilton -- now the L. J. Smith North End Athletic Field, maintained by the Hamilton Department of Parks and Recreation. In years of prolonged freeze, the product also was taken from the Great Miami River, the Miami-Erie Canal and the network of waterways which formed the Hamilton Hydraulic.

In 1898, ice on the river was seven and a half inches thick as early as Dec. 16. In good seasons, local icehouses were filled by Feb. 1 to meet demands for the next 10 to 11 months.

A 1911 newspaper story reflected the extent of the natural ice business in the area. "North of Hamilton," it explained, "there were, first of all, the two reservoirs, then north along the canal came the Sheley and Thomas pond, then the Rupp and Lawrence pond, then the Flenner ponds, two in number, and finally, the Rockdale ponds, owned by Rogers and Frederick."

"At LeSourdsville," the 1911 article said, "was also another ice cutting pond, known as Lane and Blackall's. There were quite a number of small ponds from LeSourdsville on to Middletown, all of which were under the control and ownership of Cincinnati parties."

The 1911 account said "going south, the first one that is met is Campbell's pond, about four miles south of town" in Fairfield Township. "The one below that was known as the Cincinnati Ice Company's pond. The next one belonged to the Stone Lake Ice Company of Cincinnati. Vinnedge and Schlosser owned the one south of that, and beyond this was another small pond that belonged to one the Cincinnati ice companies."

The canal and ice businesses complemented each other. To prevent freeze damage to levees, water was drained from the canal into adjacent ice ponds before temperatures dropped. In the spring, summer and fall, the stored ice moved to markets over the refilled canal.

A visible example of the relationship remains at the southern edge of Middletown, where Ohio 4 becomes Verity Parkway, north of Ohio 73.

Verity Parkway was built over the abandoned canal in the 1930s. The well-defined low land west of the parkway in Douglass Park at Lafayette Avenue was once owned by an ice company. "The depressed land areas in this vicinity," explained George Crout, Middletown historian, "are the remnants of the old ice ponds."

Development of artificial ice-making machinery doomed the natural ice industry which had boomed for half a century in the Hamilton area, especially along the Miami-Erie Canal.

Before the Civil War, William H. H. Campbell began harvesting ice from the Hamilton Basin. The basin was a branch of the canal. It extended west from present Erie Highway (which was built over the canal in the 1930s) between High Street and Maple Avenue.

In addition to his ice business, Campbell managed a 163-acre farm in Fairfield Township and served terms as state senator and sheriff.

The family wholesale business expanded for about a quarter century under the leadership of a son, Aaron L. S. Campbell. Before the turn of the century, his crews cut 50,000 tons of ice annually from five ponds. He also headed retail ice companies in Hamilton and Cincinnati.

Most winters, the Campbell firm hired between 150 and 200 men to cut ice in this area. Hundreds of other workers were employed by other ice companies.

In January 1887, a newspaper said "there are 1,000 men today working on the ice in and about Hamilton, and their wages, including the teams, will average $2 per day," a decent income in those days. "All this money is spent right in Hamilton," the report said, "and it is a source of work to many needy men who are, unfortunately, generally out of work in the winter season."

"During the past 13 years," the 1887 article said, "the ice business has tripled," and several new icehouses were built.

After a prolonged freeze, harvesting began with removal of snow and soft ice from the surface. Horse-drawn plows and men with saws cut the ice. Workers with long pikes guided the cakes to loading areas.

The blocks were hauled to icehouses, which had storage areas about 12 deep under the ground level. The ice blocks -- usually two by four feet -- were separated and insulated with straw and sawdust, the latter obtained from northern Ohio lumber mills.

Weight loss during storage ranged from 25 to 50 percent, depending on weather and business variables.

In December 1884 -- as the cutting season approached -- local houses reported ice left from the previous year. The Lake Erie Ice Company, near Port Union in Union Township, had 15,000 tons on hand. The Niagara Company of Schlosser and Clark had 8,000 tons stored in Fairfield Township.

Another long-time Butler County ice operation was at Knorr -- a location known to recent generations as the LeSourdsville Lake and Americana amusement parks.

In 1855 the A. H. Knorr Company of Cincinnati purchased land between the Miami-Erie Canal and the Great Miami River in Lemon Township. The firm built an earthen embankment around 19 acres to form a lake. It was fed water from the adjacent canal. Knorr also built 12 icehouses, each measuring 50 by 120 feet and 28 feet high, on a tract of about 40 acres.

The ice was shipped by canalboats to Cincinnati where Knorr's horse-drawn wagons delivered it to customers. As a wholesaler, Knorr also shipped ice down the Ohio River on steamboats.

Knorr sold the land and lake in 1892. Other companies continued harvesting ice there until the demand for natural ice declined. Then the lake became the basis for an amusement park. LeSourdsville Lake opened in 1922, and was renamed Americana in 1977.

In 1911, the Journal declared "the natural ice business in Hamilton is now a lost industry." The major cause, the newspaper said, was "the manufacture of artificial ice." It was cheaper to produce than natural ice. Also, it didn't rely entirely on Mother Nature, or require months of storage. Artificial ice output could be adjusted daily to meet fluctuating demand.