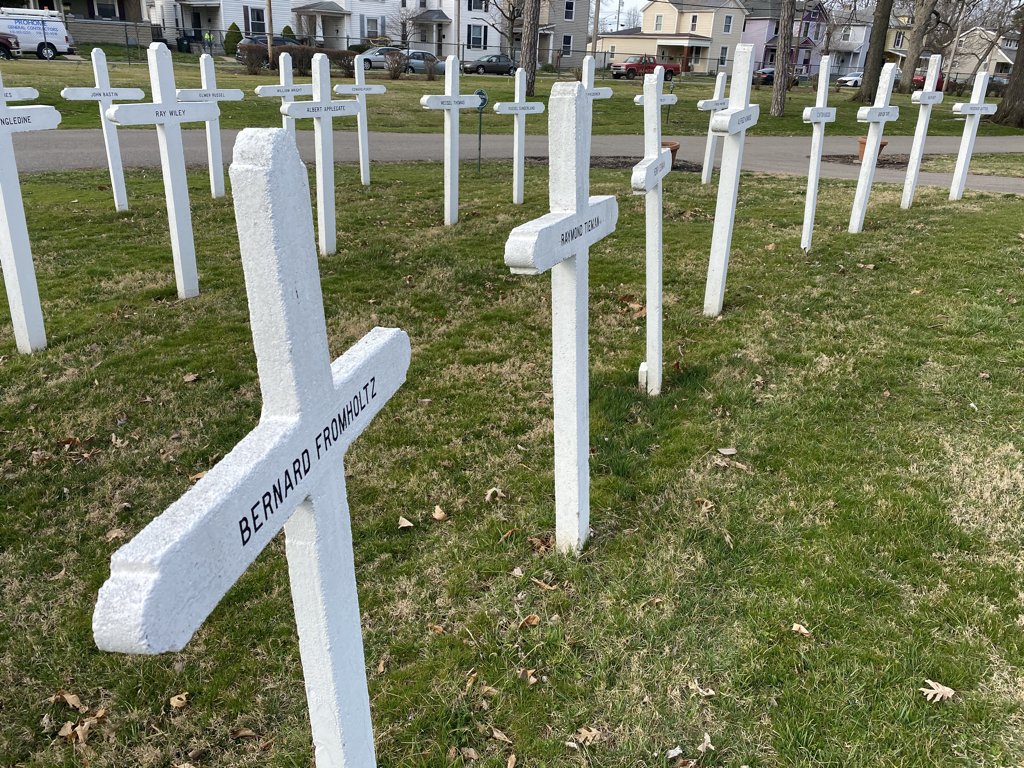 The three were among 65 Hamilton area men who died during World War I. More than 112,400 soldiers, sailors and Marines gave their lives in World War I, including more than 48,909 in combat areas.

More than half of the deaths were caused by disease, mostly during the influenza-pneumonia pandemic.

Bolser, Tieman and Fromholtz were killed in action between July 30 and Sept. 14, 1918, during the war's final three and one-half months.

Bolser, who enlisted April 23, 1917, in Hamilton, was a private in Company E, 166th Infantry, 42nd Division. He was the son of Squire Lewis Bolser and Lillian Bolser of Coke Otto (now known as New Miami).

He had joined Company E of the Third Infantry, Ohio National Guard, a few days after the United States had declared war on Germany. He died July 30, 1918, of wounds suffered during the Battle of Chateau-Thierry. Stationed in France since Oct. 18, 1917, in the Champagne-Marne and Aisne-Marne sectors, he would have observed his 19th birthday Oct. 12, 1918. -

Tieman enlisted Sept. 19, 1917, in Cincinnati, and was a private in Company C, 126th Infantry, 32nd Division. The 22-year-old son of Mr. and Mrs. Philip Tieman of Hamilton, was killed Aug. 1, 1918, during the Battle of Cha-teau-Thierry. He had arrived in the Aisne-Marne sector only months before on March 14.

Fromholtz, who enlisted Oct. 22, 1917, in Hamilton, was a private in Company K, llth Infantry, Fifth Division. His sister, Edith Clark, resided in Hamilton. The 30-year-old soldier was killed Sept. 14, 1918, during the Battle of St. Mihel. He had been stationed in France since April 24,

In an Aug. 7 letter, written only weeks before his death, Fromholtz said "I have been in 'no man's land' on a wire patrol and it is a little exciting, for the first time you have to go very quiet through the barbed wire entanglements and make as little noise as possible."

"And, at night, when everything is quiet and standing on post, you can hear very little noise, and certain hours of the day and night you can hear the shells whistling over your head and breaking," Fromholtz explained.

The bodies of the three soldiers arrived in Hamilton Saturday evening, July 30, and were taken to the residence of relatives. At 11 a.m. the day of the service they were taken to the Soldiers, Sailors and Pioneers Monument in downtown Hamilton.

The 2:30 p.m. community funeral services at the monument were conducted by members of the Frank Durwin Post 138, American Legion post. "Taps" played as the caskets were carried down the steps as a double line of Legionnaires stood at attention.

A procession was formed ending at Greenwood Cemetery where the American Legion burial service was read as the flag-draped caskets were lowered into the American Legion section. A local squad fired three volleys over the graves and services ended as "Taps" was played.

The triple funeral and associated services were planned and sponsored by the local American Legion post, named in honor of the first Hamilton man killed in action.

Pvt. Frank Durwin o£ Company E, Ninth U.S. Infantry Regiment, died Sunday, April 14, 1818, during combat in France. Born in Hamilton, the 24-year-old soldier had resided on South Seventh Street. He was the son of Frederick Durwin, who had fought in the Civil War.