​John C. Skinner "assisted in laying the foundation of the mercantile and manufacturing industries of Hamilton," observed the Hamilton Democrat in reporting his death in 1889.

In many endeavors, Skinner cooperated with John W. Erwin, who was his friend and neighbor on North Third Street for more than 40 years.

Erwin, a founder and designer of Greenwood Cemetery, and Skinner, a cemetery trustee in the 1850s, died only two days apart. They are buried side by side in the cemetery.

With Henry S. Earhart and others, Skinner and Erwin transformed Hamilton into a manufacturing stronghold.

Skinner, the oldest of five children, was born Nov. 9, 1816, in Lebanon, Ohio. As a boy, he assisted his father, who was a weaver.

According to an obituary, Skinner paid his way through school by sweeping and taking care of the building, and eventually earned enough money to enroll in Hanover College in Madison, Ind.

He remained at Hanover for three years, majoring in math and engineering. He supported himself by working in the print shop that published the Presbyterian Standard.

He left college to become an assistant engineer on the Whitewater Canal in Indiana, a job he held for about two years.

Skinner -- who was civil engineer for the town of Hamilton for three years -- laid out several turnpikes in the area, and assisted John W. Erwin in fixing the route for the Hamilton & Eaton Railroad.

He also assisted Erwin in planning the Hamilton Hydraulic in the 1840s. When Erwin withdrew as construction started, Skinner remained as engineer at a salary of $400 a year.

The hydraulic -- which borrowed water from the Great Miami River north of Hamilton -- provided the inexpensive, reliable source of water power that enabled Hamilton to develop as an industrial center.

Skinner was treasurer of the Free Soil Jeffersonian Club, which in 1848 started the anti-slavery Free Soil Banner, an abolitionist newspaper. It was edited by his friend, Erwin.

Also in 1848, Skinner began 10 years in the grocery and hardware business while continuing his public service. He was a Butler County deputy sheriff for two years, starting in 1849, and at the same time a member of Hamilton City Council.

In 1861, he purchased a paper mill on the Hamilton Hydraulic. He operated the Skinner & Tweedale mill, built by John Erwin, until 1884.

Skinner died April 19, 1889, the night before the funeral of his friend and frequent colleague, John W. Erwin. 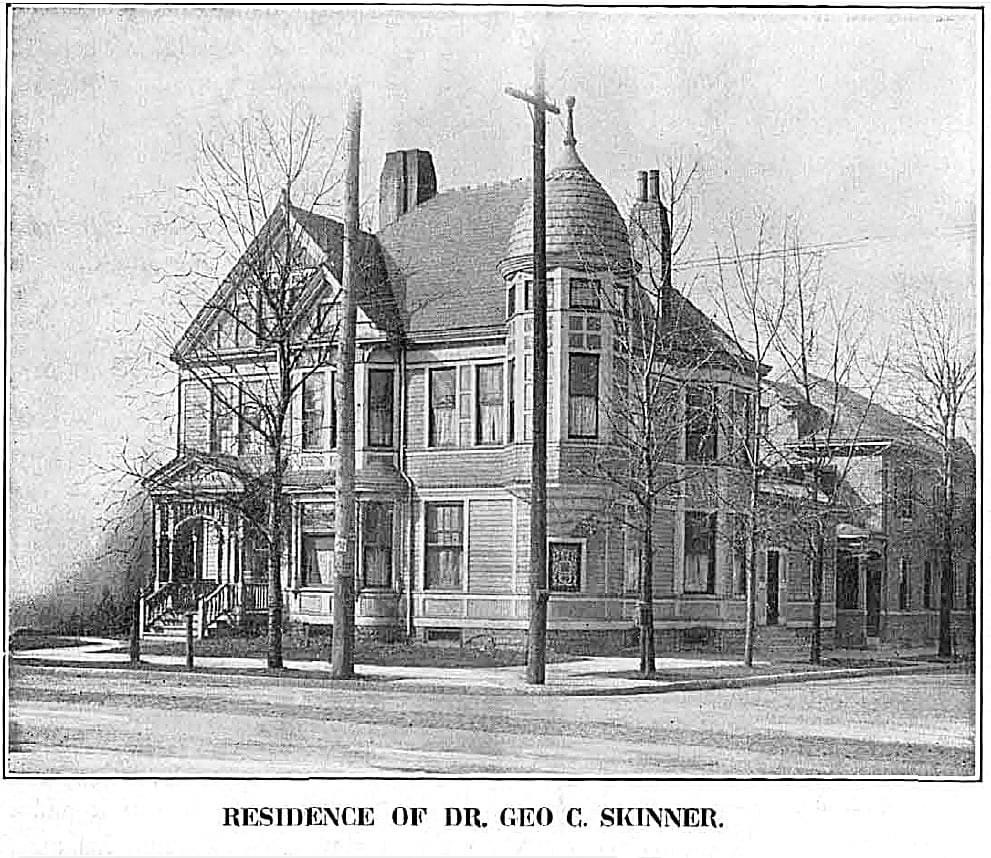 Above: Home of Dr. George C. Skinner, southwest corner of Third and Buckeye Streets, Hamilton, Ohio. Building is no longer there. Photo from “The Butler County Atlas and Pictorial Review”, 1914, by the Republican Publishing Company, Hamilton, Ohio.