Funny:
I have a nice detailed art work of the cabin. You can either look directly at the cabin or this. Both are cool. (Then take out coloring book)
1) Who was Mad Anthony Wayne? A retired Major General that was called back into service by George Washington.
2) Why did he come through Hamilton? He was on his way to Fort Recovery ( where St. Clairs army was massacred)
3) Why was he called Mad? He had a fiery personality and he did some crazy things.
4) What did his exploits achieve? State hood in 1803. 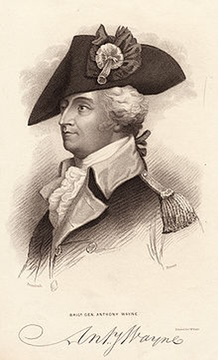 Anthony Wayne was an American soldier, officer and statesman of Irish descent. He adopted a military career at the outset of the American Revolutionary War, where his military exploits and fiery personality quickly earned him promotion to brigadier general and the nickname "Mad Anthony".

​President George Washington recalled Wayne from civilian life in order to lead an expedition in the Northwest Indian War which had been a disaster for the United States up till that point, particularly with the news of St. Clair's Defeat. Many American Indians in the Northwest Territory had sided with the British in the Revolutionary War, but the British had ceded any sovereignty over the land to the United States in the Treaty of Paris of 1783. The Indians living in the region quickly became embroiled in conflicts with American settlers who were flooding into the region in the aftermath of the war. The Western Confederacy achieved major victories in 1790 and 1791 under the leadership of Blue Jacket of the Shawneesand Little Turtle of the Miami tribe. They were encouraged and supplied by the British, who had refused to evacuate their fortifications in the region despite having agreed to do so in the Treaty of Paris, pointing to American refusal to honor the debt-agreements that they had agreed to pay as signs that the Treaty was not yet applicable.
Washington placed Wayne in command of a newly formed military force called the "Legion of the United States", and Wayne established a basic training facility at Legionville to prepare professional soldiers for his force. This was the first attempt to provide basic training for regular Army recruits, and Legionville was the first facility established expressly for this purpose. Wayne then dispatched a force to Ohio to establish Fort Recovery as a base of operations at the location of St. Clair's Defeat, and the fort became a magnet for military skirmishes in the summer of 1794. Wayne's army continued north, building strategically defensive forts ahead of the main force.
A tree fell on Wayne's tent on August 3, 1794, at Fort Adams in northern Mercer County. He was knocked unconscious, but he recovered sufficiently to resume the march the next day to the newly built Fort Defiance.[14] On August 20, 1794, he mounted an assault on the Indian confederacy at the Battle of Fallen Timbers in Maumee, Ohio, which was a decisive victory for the U.S. forces and ended the war. Wayne then continued to Kekionga where he oversaw the construction of Fort Wayne. He then negotiated the Treaty of Greenville between the tribal confederacy and the United States, which was signed on August 3, 1795. The treaty gave most of Ohio to the United States and cleared the way for the state to enter the Union in 1803.

General "Mad Anthony" Wayne — whose name is synonymous with military success in Ohio — established his reputation as a meticulous organizer and aggressive leader during the American Revolution.

He was born Jan. 1, 1745, in Waynesboro, Chester County, Pa., the only child of Isaac and Elizabeth Wayne. He married Mary Penrose March 25, 1766; she was the daughter of a Philadelphia merchant.

Wayne, who had worked as a surveyor, was a successful farmer and operator of a tannery, and a member of Pennsylvania's colonial house of representatives on the eve of the revolution.

He began protesting British actions in July 1774 and — despite a lack of formal military training and experience — was given command responsibilities by the Continental Congress.

Wayne helped organize a regiment from Chester County that became the Fourth Pennsylvania Battalion. He was appointed its colonel Jan. 3, 1776, and was promoted to brigadier-general Feb. 21, 1777.

During the revolution, he led troops from Canada to Georgia and participated in many major campaigns and battles, serving at various times under and with George Washington, Alexander Hamilton, Nathanael Greene, Arthur St. Clair, Richard Butler, Henry Knox, Friedrich von Steuben and the Marquis de Lafayette.

When the revolution ended, he was respected as an officer who insisted on discipline and intense training for his soldiers — traits that later made a difference in his campaign against the Indians in the Northwest Territory.

His nickname, "Mad Anthony," usually is attributed to his boldness, bordering on imprudence, in battle. But a recent biographer, Paul David Nelson, believes Wayne's success went beyond aggressiveness.

"Contrary to common belief, his ability as a soldier rested not upon some wild-eyed enthusiasm, but a natural flair for leading troops and a sensible recognition that his success as an Army commander hinged upon adherence to military fundamentals such as planning and logistics," said Nelson, in Anthony Wayne, Soldier of the Early Republic.

Wayne didn't realize the same success in civilian life between 1783 and 1792. He failed as a rice farmer, and personal debts forced foreclosure on his property in Georgia.

During those years, he also served in the Pennsylvania General Assembly (1784) before moving to Georgia. There, he was a member of the state convention that ratified the U. S. Constitution (1788), and was elected to a short-lived term in Congress.

March 4, 1791, Wayne assumed his seat in the House of Representatives from Georgia, but he lost it 17 days later because of charges of irregularities in the election.

Military disasters in 1790 and 1791 in portions of the Northwest Territory (which would become Ohio and Indiana) opened the way for Wayne to return to the army.

President George Washington — Wayne's commander during much of the revolution — appointed Wayne major general and commander-in-chief of the frontier army March 5,1792.

Although he usually was based at either Fort Washington in Cincinnati or Fort Greenville, his assignment periodically brought Wayne to Fort Hamilton.

His army was successful on the battlefield in August 1794, and the next summer Wayne concluded the Treaty of Greenville, removing Indian threats from most of Ohio.

The 51-year-old major general died Dec. 15, 1796, at Presque Isle (now Erie), Pa. He is buried in the yard of St. David's Church in Radnor, Pa., where the inscription on his monument notes that "His military achievements are consecrated in the history of his country and in the hearts of his countrymen."

There was a cautious optimism on the Ohio frontier in 1794 as Gen. Anthony Wayne patiently built and honed his American army in preparation for a showdown with the Native Americans in the region.

Fort Hamilton -- completed in September 1791 during a previous offensive -- remained an important supply post as the Pennsylvanian readied his forces.

Wayne feared that the Indians, at the urging of the British, would attack his army before he could launch an assault. To lessen that threat, he organized a scouting system which constantly observed Indian villages and positions.

Many of his spies or rangers had learned Native American ways as captives of the Indians. His chief scout after September 1793 was William Wells, who typified the group.

Wells was born in 1769 or 1770 in western Pennsylvania. He moved with his family to Kentucky, building Wells Station about 30 miles east of Louisville, in 1779. His father was killed there by Indians in 1781, and three years later Wells was captured, taken to the interior of what became Indiana and was adopted by the Miami.

Eventually, he became the son-in-law of Little Turtle, a Miami chief who masterminded the defeat of two U. S. armies in 1790 and 1791. Wells, fighting as an Indian, had distinguished himself in both campaigns.

Sometime after defeating Gen. Arthur St. Clair's army in November 1791, Wells and Little Turtle agreed that Wells would join the American army and work for peace while Little Turtle did the same among the Native Americans.

When Wells became Wayne's chief scout, one of his colleagues was Henry Miller, who had a similar background.

Henry Miller and a brother, Christopher Miller, also had been captured near their Kentucky home and became adopted Shawnee. Henry Miller, at about the age of 24, decided to leave and return to white culture, while his brother remained with the Shawnee.

Wells and Miller were joined in a 1794 mission by Robert McClellan, who later resided periodically in Hamilton with his brother, William McClellan, operator of Hamilton's first tavern and Butler County's first elected sheriff. In 1794, William McClellan was a packhorseman working primarily out of Fort Hamilton.

Wells, Miller and McClellan were ordered to advance near the enemy's villages and take a prisoner who could provide information on Indian intentions and movements.

Their opportunity came on the banks of the Auglaize River - in what is now west-central Ohio. There they observed a trio of Indians preparing a meal, unaware they were being watched.

Wayne's scouts devised a plan -- kill two of the men and take the third prisoner. Their first shots were effective. But the survivor wasn't immediately subdued, and attempted to escape.

Wayne's scouts gave chase. When the Indian jumped off about a 20-foot embankment, McClellan followed and wrestled with him in the water and mud. When he drew a knife, McClellan countered the threat with a tomahawk.

Then Wells and Miller tied the uncooperative captive, placed him on a horse and headed toward Fort Greenville.

As they rode, Miller thought the Indian looked familiar. On impulse, he called the man by his brother's Indian name. The surprised prisoner responded and the Miller brothers were reunited.

Christopher Miller, the captive, subsequently gave Wayne the information he wanted about the Indians. Within a few days he joined his brother Henry in the productive scout detachment commanded by Captain Wells.

After Wayne's victory over the Native Americans later in the year at Fallen Timbers, Christopher Miller served as an interpreter for the Shawnee during the negotiations which led to the Treaty of Greenville in 1795.

Little Turtle and the Treaty of Greenville

Painting of the treaty of Greenville 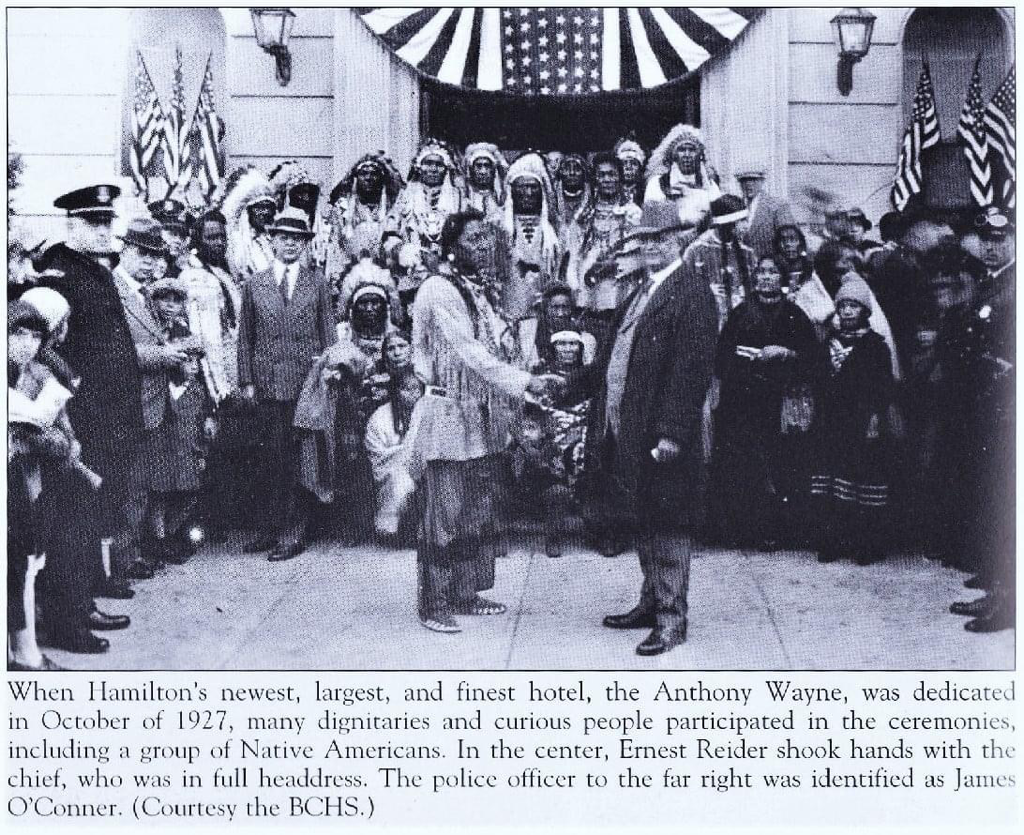