​Following the flood of 1913, a public market was held around the Sutherland Park on the West Side? (The park is between Park and Wayne avenues and North D and North E streets.) 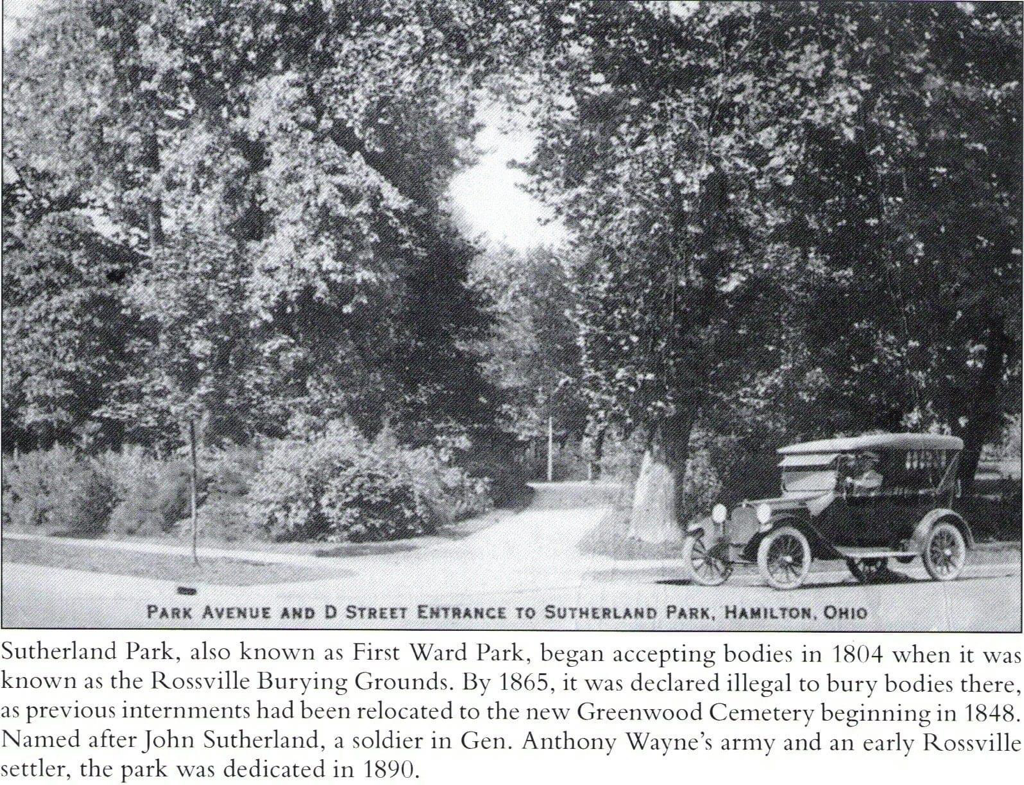 ​The graves of some of the area's earliest residents have been unintentionally disturbed again. Hamilton parks and recreation employees recently unearthed headstones in Sutherland Park, formerly known as Wayne Park and First Ward Park and originally the Rossville Burying Ground.

The cemetery was created when the town of Rossville was formed in March 1804 on the west bank of the Great Miami River. There were 132 lots in the original Rossville plat, which today would cover about a 30-block Hamilton area from present Millikin Street on the south to Wayne Avenue on the north, and west from the Great Miami River to F Street.

The Rossville Burying Ground was platted in 1804 at the northwest corner of Boudinot and Third streets in Rossville at the edge of the town. Later, Boudinot became Park Avenue and Third became North D Street.

In recent decades, it has been assumed Rossville burials ended in 1848 when Greenwood Cemetery opened. About 150 bodies were removed from Rossville to the new cemetery between 1849 and 1869. But an 1888 newspaper article said interments continued in the Rossville Burying Ground until 1863.

In June 1878 John C. Weaver, the county surveyor, prepared specifications and an estimate "for burying the grave stones in the First Ward Park." He proposed that "each base head and footstone must be buried on its respective grave with the lettered side of the stone up so that the top of the stone will be 18 inches below the surface of the ground."

At 20 cents a grave, Weaver figured $43 as the total cost for covering the remaining 215 graves. On the basis of newspaper accounts, the work didn't start until 10 years later.

"Pursuant to resolution awarding the contract for leveling the First Ward Park, William Brereton and force are engaged at present in plowing and digging the earth in the high places and in turn scooping it into the low places," a newspaper reported in December 1888.

The article said "some of the graves are not marked" and other tablets had been destroyed. "Since the contractor and force have gone to work, no attention has been paid to the last resting place of the pioneers of Butler County. The marks of respect have been roughly broken, thrown in a pile, and the relative could not pick out the stones and inscriptions from the chaos.

"Worse than that," the Hamilton Democrat said, "the graves are scooped open, coffins broken and the skeletons exposed to view. Yesterday children were playing with the bones of pioneers, having pried open an exposed coffin with sticks."

Nearly thirty years ago -- in October 1964 -- an uninformed city crew laying a gas line uncovered grave markers in the Hamilton park. "Had it been known a burial ground was under the park, we would have laid the line around the park," explained a city official. The markers were returned to their original positions when the gas-line trench was filled.

Samuel Dick -- the other cemetery donor -- was born in 1764 in Ireland, and came to the new United States in 1783, first to Baltimore and later to Washington County, Pennsylvania, and Cincinnati. In 1801 he purchased 640 acres west of the Great Miami River near the mouth of Indian Creek. Dick died Aug. 4, 1846.

Dick was buried in the Bethel Burying Ground at Millville. Sutherland's remains are in Greenwood Cemetery in Hamilton.