The Symmes Purchase, also known as the Miami Purchase, was an area of land totaling roughly 311,682 acres (487.003 sq mi; 1,261.33 km2)[1] in what is now Hamilton, Butler, and Warren counties of southwestern Ohio, purchased by Judge John Cleves Symmes of New Jersey in 1788 from the Continental Congress. 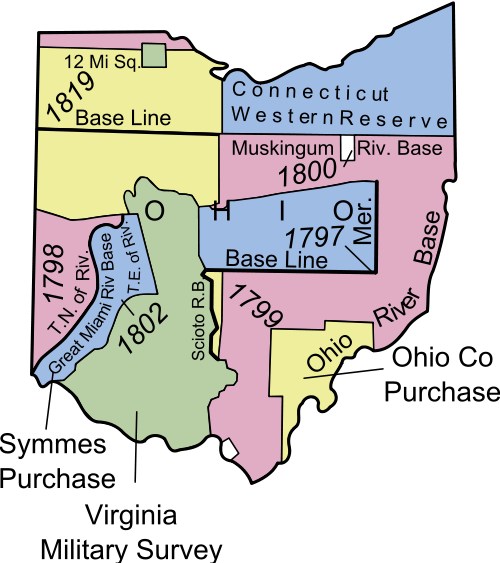 EditIn the 1780s, Benjamin Stites, a friend of Symmes, was visiting Limestone (now Maysville, Kentucky) and lost some of his horses to theft by Native Americans. Pursuing them through the wilderness of southwestern Ohio, he travelled as far north as Xenia, observing the fertility of the country in the process. He was so impressed with the region that he informed Symmes of its prospects upon his return. Symmes gathered a syndicate, known as the Miami Company, to buy the land.[2] The original contract was for 1,000,000 acres (4,000 km2), but the company couldn't afford to pay for the land, and paid for and received only 311,686 acres (1,261.35 km2) in the southwest portion of the original tract. The land was ​66 2⁄3¢ per acre.