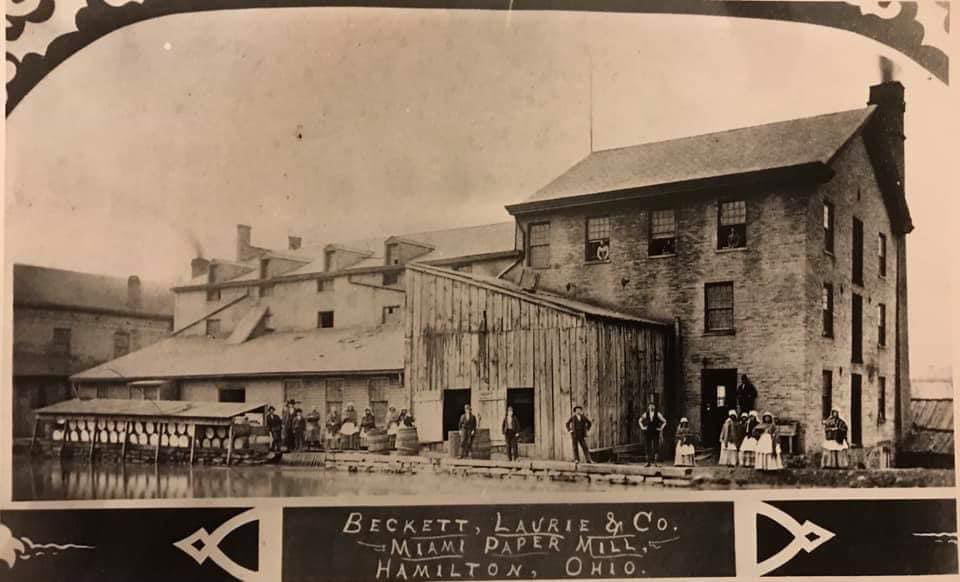 Hamilton's oldest operating industry started 150 years ago this month. Now part of International Paper Company, the paper mill that began in May 1848 was known as the Beckett Paper Company during most of its history.

For decades, the Hamilton plant has claimed to be "the oldest operating fine paper mill west of the Allegheny Mountains."

The mill has produced a variety of products, ranging from newsprint made from rags through the Civil War era, and writing and bond papers until World War I, to uncoated fine grades for the advertising industry in the 20th century.

A company publication in the 1970s said "many old-timers in the industry still call us 'The Cover Mill,' since we developed the first cover paper, the famous Buckeye Cover, in 1894." The same source said at the end of the 19th century, "the company's experiments with the then new analine dyes led to the development of the industry's first extensive range of colored cover papers."

Among its thousands of customers was the American Book Company, a Cincinnati publishing house that produced the McGuffey Readers in the 19th century.

In the 1840s, the availability of cheap power -- the privately-owned Hamilton hydraulic -- attracted Calvin Reilly, a Toledo businessman, to invest in Hamilton. He hired Adam Laurie, a young Scotsman experienced in papermaking, to design, build and manage a paper mill. Also involved in the construction was John L. Martin, a Vermont native who was an experienced civil engineer and millwright.

When Reilly encountered financial problems, Laurie sought capital to save the project. The new investor was William Beckett, a young Hamilton lawyer who had been acquiring real estate in the area.

Other partners in the new mill were Martin and a Hamilton lawyer, Francis D. Rigdon. Laurie was superintendent of the Miami Paper Mill until 1857, and a partner until 1886.

In May 1848, the $12,000 mill opened, producing about a ton of rag-based newsprint each day. Its location then was described as north of Dayton Street and west of the Hamilton Hydraulic, which drew water from the Great Miami River north of Hamilton. In the 1880s, the hydraulic was filled in and the railroad now owned by the Norfolk Southern was built over part the waterway's route.

The mill has been rebuilt, modernized and expanded several times in its 150 years. The original mill was razed and reconstructed in 1905. The 1913 flood caused extensive damage and production stopped for six months while the plant was rebuilt.

The hydraulic company's water power led to the building of the mill, but water supply is one of the reasons for its endurance, according to Dave Belew, who headed Beckett operations from 1974 until his retirement in 1992.

"People who come to our mill are almost always amazed that we have no river or lake nearby," Belew said in a 1975 interview. "We have to explain that our water comes from artesian wells under the ground. That is a big plus, and that is the main reason that the Miami Valley has so many paper mills," Belew explained.