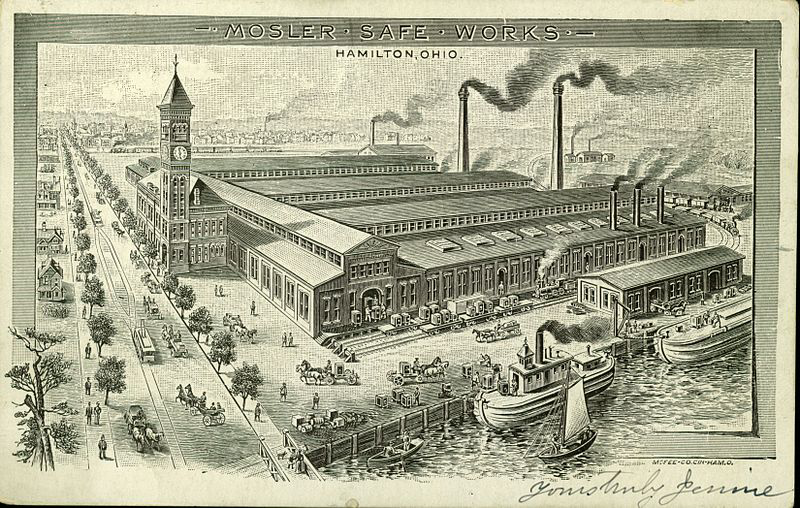 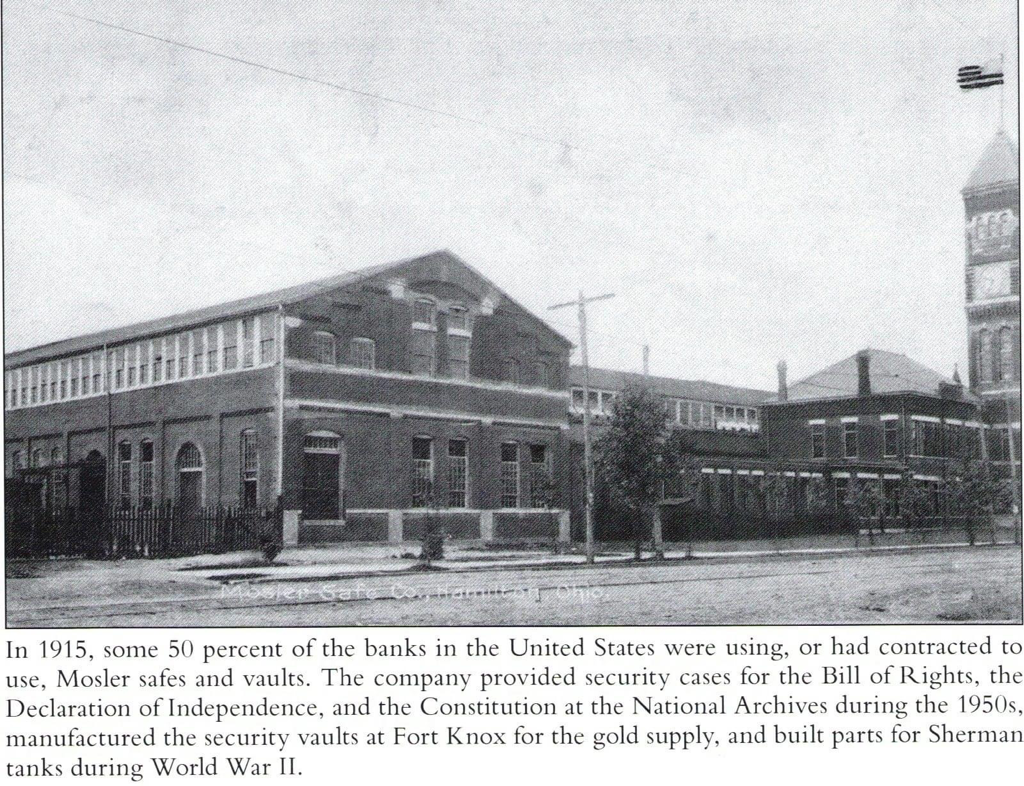 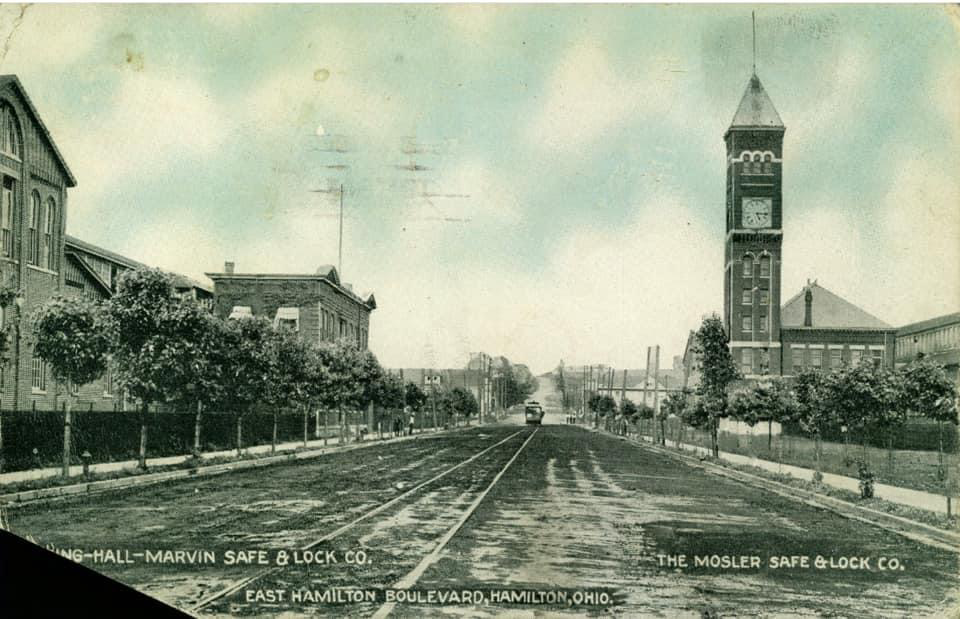 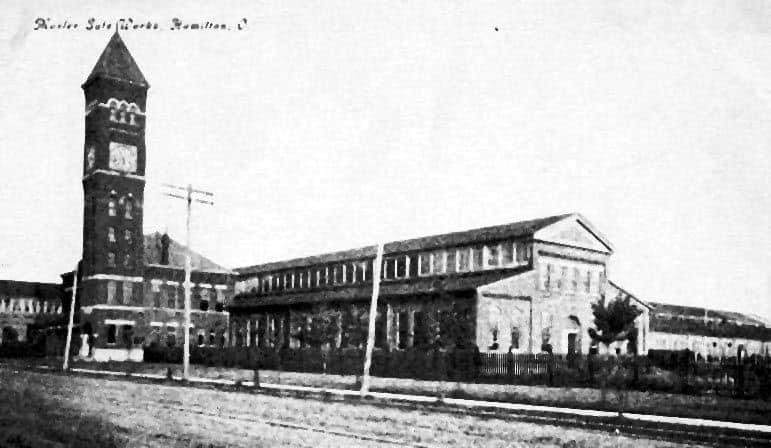 "Many of Largest Vaults by Mosler," Hamilton Journal-News, December 19, 1936
Many of the world's largest safes and vaults are made in Hamilton, which for forty-six years has been the home of the Mosler Safe Company.

The business was established in Cincinnati by the Mosler Brothers -- M., William, and Julius -- all of whom were virtually brought up in the safe business.

Mosler Safe Works, Hamilton
The first factory was located on Pearl Street, Cincinnati, but it soon expanded to the limits of the site on which it had been built and another had to be chosen. The second location on Elm Street and the third on Fourth Street, were likewise speedily outgrown, so it was determined by the Mosler Brothers to move out of town and to a location that afforded room for a modern large factory with plenty of room for expansion.

It was in 1890 that this project came up and with the cooperation of the business and civic leaders of the community, the present site was selected. It is bounded by the Pennsylvania railroad on the east, Grand Boulevard on the north, Lincoln Avenue on the south and a boulevard on the west.

In coming to Hamilton, the company brought all of its skilled artisans, and its office force, who for the most part still live here. The majority of them have built their homes in East Hamilton, close to the factory and as home owners, taxpayers, and good citizens have been an asset to the community.

The name of Hamilton had been spread not only throughout the nation, but throughout the world through the products and representatives of the company. Wherever safes and vaults are used, there the name of Mosler will be found. Walking into almost any store or bank, the American sees the legend: "Mosler Safe Company, Hamilton, Ohio, USA."

As Hamilton grew and prospered, so did the Mosler Safe Company. Since achieving its supremacy in the safe and vault business, it never has relinquished that position. Perhaps the most prominent of its recent achievements has been the building of the vaults for the United States gold reserve at Fort Knox, Kentucky. . "


At its peak, Mosler employed 1,000 in Hamilton. In 1986, American Standard Inc. of New York sold Mosler to a group of Mosler managers and outside investors. In 1991, Mosler celebrated one hundred years in Hamilton and at that time employed 525 workers in Hamilton, with a total of 2,400 employees.
​
The Mosler Safe Company was a manufacturer of security equipment—most notably safesand bank vaults—from 1874 until its bankruptcy in 2001.
The Mosler Safe Company factory, Hamilton, circa 1894.
Founded in Cincinnati by Gustave Mosler and Fred Bahmann as Mosler, Bahmann & Company in 1867. In 1874 after Gustave's death, the Mosler family had a falling out with Mr. Bahmann, leaving Mosler, Bahmann & Company to start the Mosler Safe & Lock Company. Both companies remained in Cincinnati until the 1890s. When Mosler Safe & Lock Co. outgrew its original factory it relocated to Hamilton in 1891, where it remained until its 2001 bankruptcy. Mosler, Bahmann & Company remained in business until around 1898.[1]
Its safes and vaults were renowned for their strength and precision manufacture: several Mosler vaults installed in Hiroshima's Mitsui Bank building prior to WWII survived the nuclear attack, a fact the company widely publicized in its marketing.[2]When the US government began building bunkers and silos during the Cold War, Mosler became the de facto gold standard contractor for blast doors. Mosler built the vault formerly used to display and store the United States Constitution and Declaration of Independence.[1] One example, installed at the Atomic Energy Commission's Oak Ridge National Laboratory, weighed approximately 138 tons including the frame. Despite the weight ("the largest and heaviest hinged shielding doors in the world"), each 58-ton blade could be opened and closed manually by one person. Mosler also built the gold vaults for the United States Bullion Depository at Fort Knox.[3][4]
Mosler was controlled by its founding family until 1967, when they sold it to American Standard Companies. American Standard then sold the division to a group of Mosler managers and outside investors in 1986.[5]
After 134 years in business, Mosler filed Chapter 11 bankruptcyin August 2001, citing continuing debt problems, and ceased operations shortly thereafter. Diebold subsequently announced programs to support former Mosler customers[6] and ended up buying much of the former company in bankruptcy court a few months later.
The Mosler name carries on to this day in Canada as Chubb-Mosler and Taylor Safes Ltd.,[7] the outcome of a 1950s merger of Mosler's Canadian operations with those of Chubb Security, followed by the acquisition of Taylor Safesof Canada in the following decade.[8]