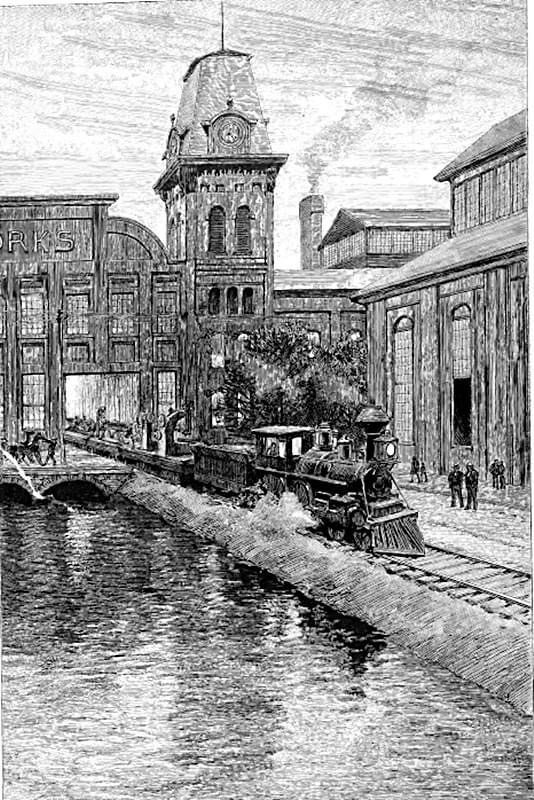 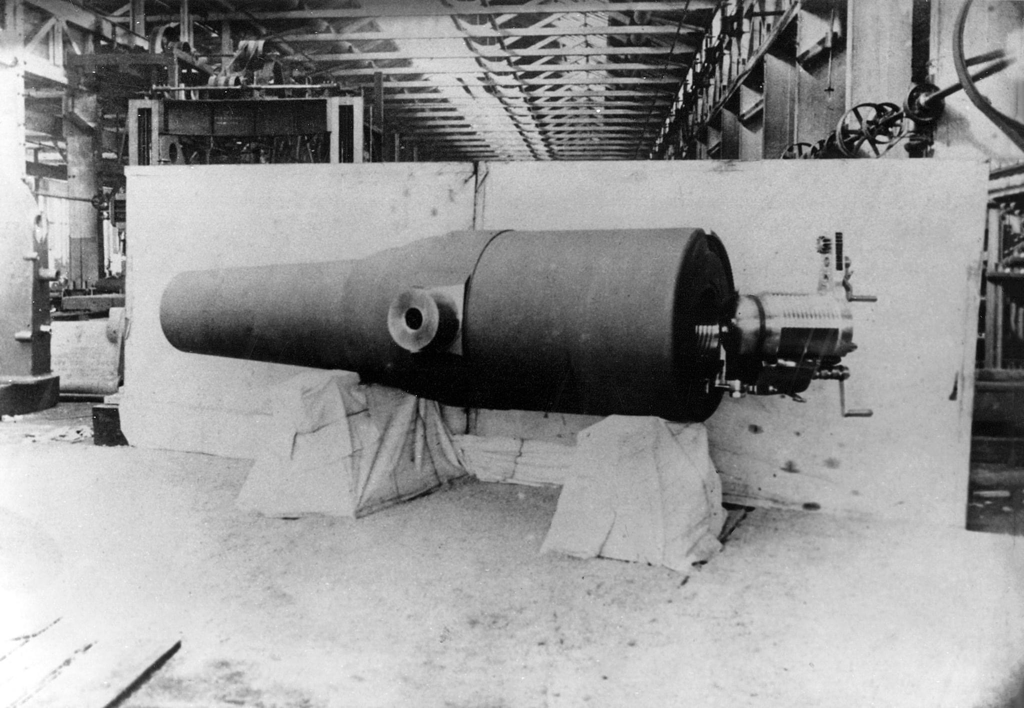 Among Hamilton's vanished industrial credits is a claim to being one of the nation's leading centers of machine tool production. Most notable among several firms was the Niles Tool Works that moved to Hamilton in 1872 and eventually became part of the General Machinery Corp. "The production of machine tools involves the highest grade of skill in design and of workmanship in production," noted a souvenir book published during Hamilton's centennial in 1891.

Machine tools, the book explained, include lathes, planing machines, drilling machines, slotting machines, boring machines, gear cutters "and a host of other machines designed for operating on cold metals by the operation of a cutting tool."

Niles traced its history to two brothers, James and Jonathan Niles, who had moved to Cincinnati from their native Connecticut. Sources vary on the starting date, usually listing 1843 or 1845.

The brothers began by repairing steamboats on the Ohio River, but expanded to other products. After designing their own power plant, they built steam-powered sugar mills for plantations in Louisiana. By 1853, Niles -- with between 400 and 500 workers -- was a major employer in Cincinnati..

Most accounts say the Niles Works entered the machine tool business by accident. During the Civil War, when their boat building and rebuilding business boomed, the shop needed another lathe, but none was readily available. Instead, two young employees, George A. Gray Jr. and Alexander Gordon, assumed the task. Their success led to formation of a new Niles department devoted to machine tools.

In 1866, with the Civil War ended, the Niles brothers sold their business to Gray and Gordon who formed a partnership with James Gaff, a wealthy businessman in Aurora, Ind. Gordon provided the technical expertise, Gray the business skills and Gaff the capital.

Gray, Gordon and Gaff purchased the Niles name, calling their venture the Niles Tool Works to emphasize the firm's main business, the manufacture of machine tools. Their success encouraged expansion, but it had to be in a different location. The Cincinnati factory occupied land that was a logical site for a new railroad station.

In 1871 work started on a new factory facing North Third Street and extending west to North Second Street along Mill Street (north of Vine Street). A year later the Niles Tool Works began operating in Hamilton. The firm was incorporated in 1874 with Gaff as president, Gordon as secretary and Gray as treasurer and superintendent.

Expansions, changes and reorganizations followed as the company built a national and then an international reputation for quality work while surviving periodic national business slumps, called panics in the 1800s.

New and expanding American industries and the westward extension of railroads were customers for Hamilton-made machine tools in the 1875-1900 period. The U. S. Army and U. S. Navy also relied on Niles for large guns and naval equipment. In 1882 Niles opened an office in Philadelphia, and others followed in New York, Chicago and Pittsburgh.

Alexander Gordon, who directed operations, was a constant during several management changes and additions. Gray withdrew from the company in 1877, replaced by R. C. McKinney. Gaff died in 1878. He was succeeded by his son, James W. Gaff, also an Aurora businessman, who died in 1889. Other additions in the late 1870s were James K. Cullen in sales and George T. Reiss in engineering. McKinney, Cullen and Reiss became leading civic citizens in Hamilton as well as a strong management team for Niles Tool Works.

Niles acquired companies in other cities in the U. S. and Canada, built a healthy export business and in 1899 became part of a national conglomerate, Niles-Bement-Pond Co., which became the largest machine tool company in the world.

In 1928, George A. Rentschler merged his Hooven, Owens, Rentschler Co. and Niles to form the General Machinery Corp. In a series of post-World War II mergers, GMC was transformed into Lima-Hamilton and finally Baldwin-Lima-Hamilton before completing relocation to Eddystone, Pa., by January 1960.

​
Alexander Gordon, who had helped form the company a few years earlier, was instrumental in bringing the Niles Tool Works to Hamilton in 1872. Under his leadership, the firm became a major employer in Hamilton and internationally recognized in the machine tool industry in the late 19th century.

Gordon was born Dec. 16, 1830, in Belfast, Ireland. His parents immigrated to the United States, but soon returned to Ireland where their son was educated for the Presbyterian ministry at Marshall College in Aberdeen.

As a young man, he came to Cincinnati and attained U. S. citizenship, but he didn't enter the ministry. Instead, Gordon worked as a machinist at the Niles Works in Cincinnati, a company primarily involved in repairing steamboats on the Ohio River.

During the Civil War, he served aboard Union ships on the inland rivers. As a result of that service, he was afterward known as Colonel Gordon. His life took a dramatic turn during the war while a civilian worker at the Niles Works.

The firm was busy building and refitting steamboats for war service when another lathe was needed in the shop. When none could be purchased, Gordon and another employee, George A. Gray Jr., built one. Their skill led Niles to open a new department to manufacture machine tools.

In 1866, a year after the Civil War ended, James and Jonathan Niles sold their machine tool business to Gray and Gordon. They formed a partnership with James Gaff, a wealthy businessman in Aurora, Ind. The trio also purchased the Niles name, changing it to Niles Tool Works to emphasize the manufacture of machine tools.

Gordon and Gray moved their expanding operation to Hamilton in 1872, occupying a new factory that extended from North Third to North Second streets along Mill Street (north of Vine Street). Under Gordon's direction, Niles grew despite periodic business downturns. Niles acquired other machine tool operations and opened a sales office in Philadelphia in 1882. Others followed in New York, Chicago and Pittsburgh in following years.

Gordon was responsible for building much of the national and international business. His obituary said "he had crossed the Atlantic Ocean almost 100 times, been to most all the ports of the Pacific, knew the Mediterranean by heart as well as the Baltic Sea, the River Rhine, the Nile and all those other bodies of water and interesting parts of the old world." Some of that travel was on his private yacht, the Asteria.

Colonel Gordon founded Deutscher Niles in Berlin, Germany, and, at the invitation of the Russian government, built a version of the Niles Tool Works in St. Petersburg.

He also acquired real estate throughout Hamilton, and in 1882 moved into a large house at 319 North Third Street. The brick octagon house had been built in 1863 for Clark Lane, a Hamilton industrialist and philanthropist who was responsible for starting what is now the Lane Public Library across the street.

In 1875, Lane sold the house to John L. Martin, an industrialist and banker. Gordon acquired the property from Martin in 1882. Gordon, a frequent business traveler, also maintained a residence in New Jersey and at the Waldorf Astoria in New York City.

Gordon and his wife, Caroline (Carrie), had a son, Fred, and a daughter, Lillian. They also adopted Frederica Jane Smithson, known as Jenny, who was the orphaned daughter of Alexander Gordon's sister. Lillian and Jenny were raised as sisters. Mrs. Caroline Gordon died in 1894.

A year later, in 1895, Jenny Gordon married C. Earle Hooven, a grandson of John P. Hooven, who came to Hamilton in 1877 to begin an agricultural implement business. In 1882 Hooven had been involved in organizing the Hooven, Owens, Rentschler Co.

Jenny and C. Earle Hooven and their family occupied 319 North Third Street for about 47 years. Until his death in London in September 1910, Colonel Gordon also resided there while in Hamilton.

In 1942 the house passed to the Hooven's daughter, Mrs. Marian (Rennick) Hallowell of Middletown. The next year, 1943, Bertrand Kahn acquired it and presented the Lane-Hooven House to Hamilton for civic and charitable uses. He donated it as a memorial to his father, Lazard Kahn, a Hamilton industrialist (Estate Stove Co.) and civic leader.

In 1951 the Lane-Hooven House was conveyed to the Hamilton Community Foundation. That organization, which has its office there, has restored and maintained the building that is on the National Register of Historic Places. 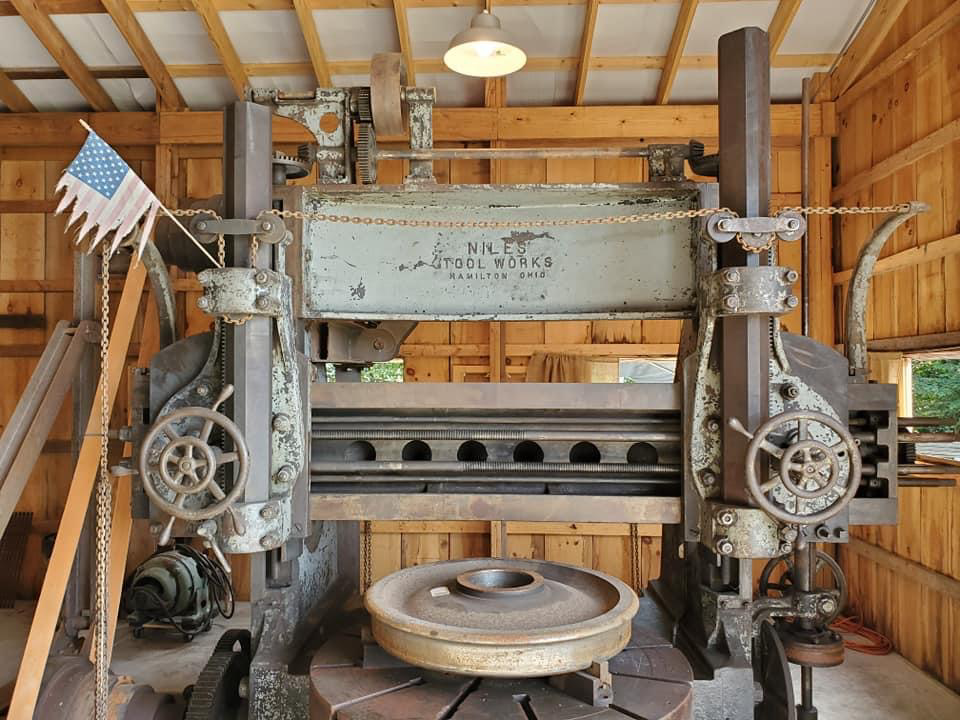 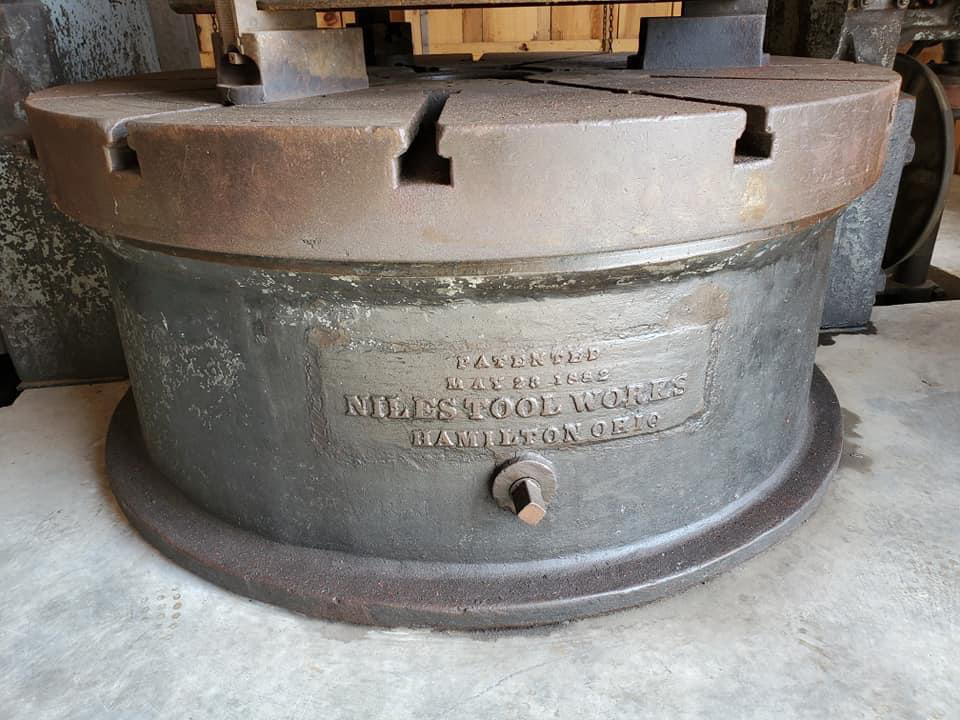 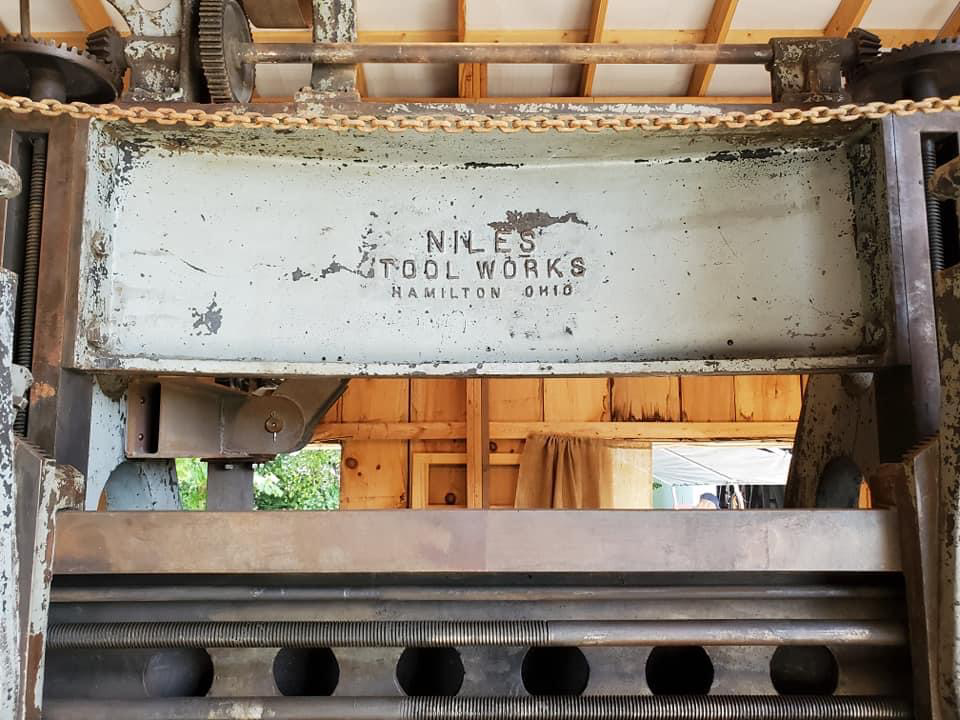 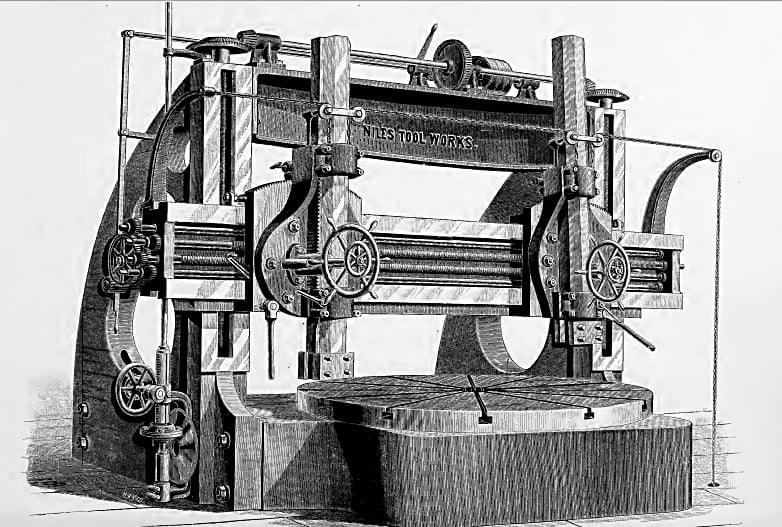 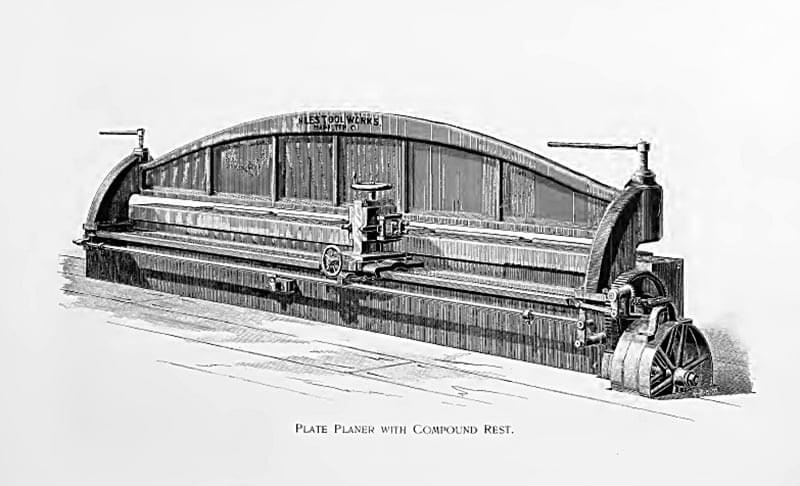 Illustration of a plate planer with compound rest from “Catalogue of the Niles Tool Works”, 1891, Hamilton, Ohio. 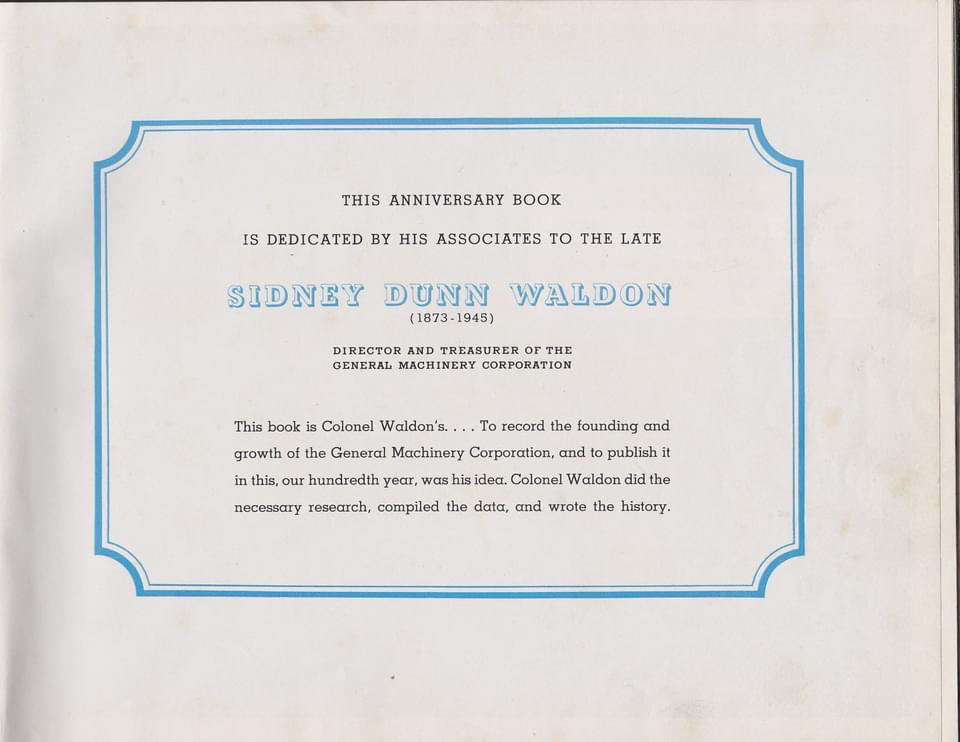 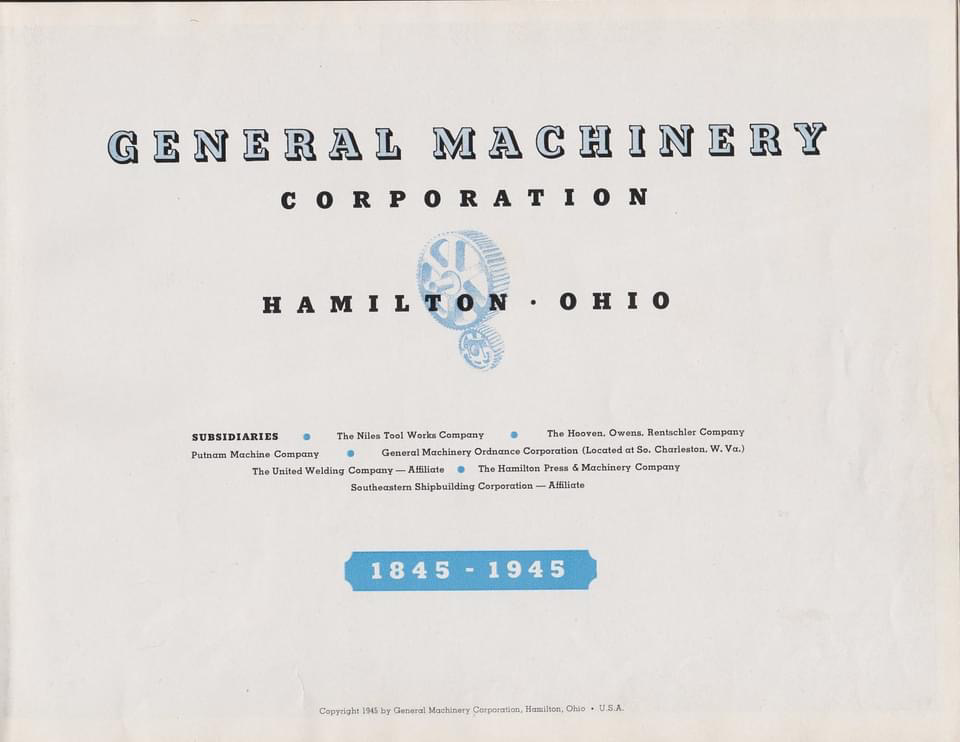 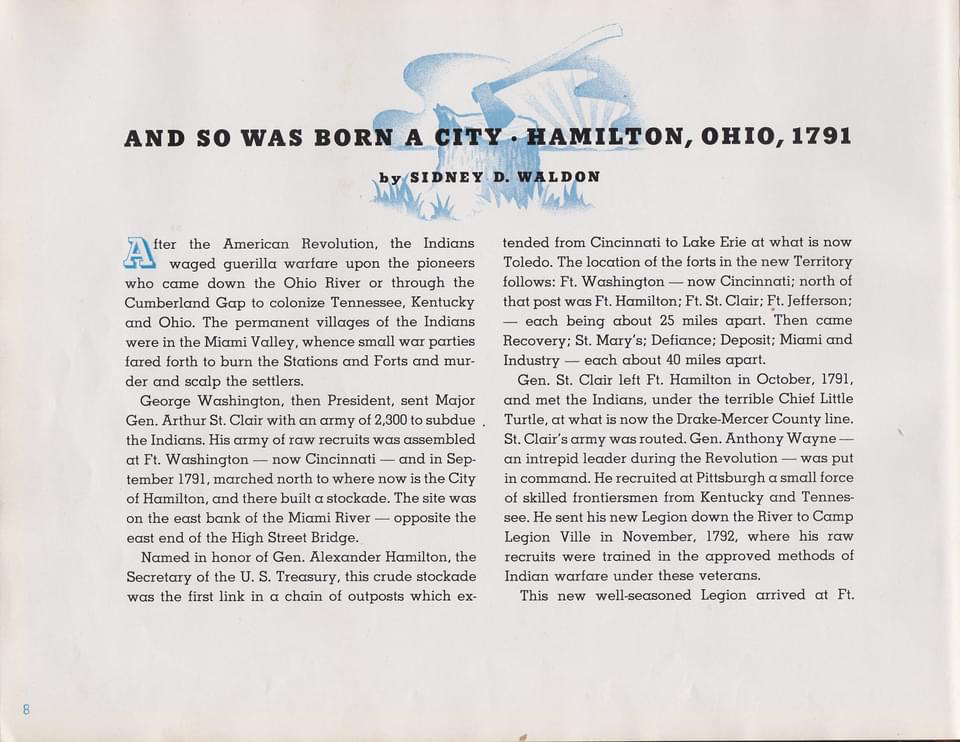 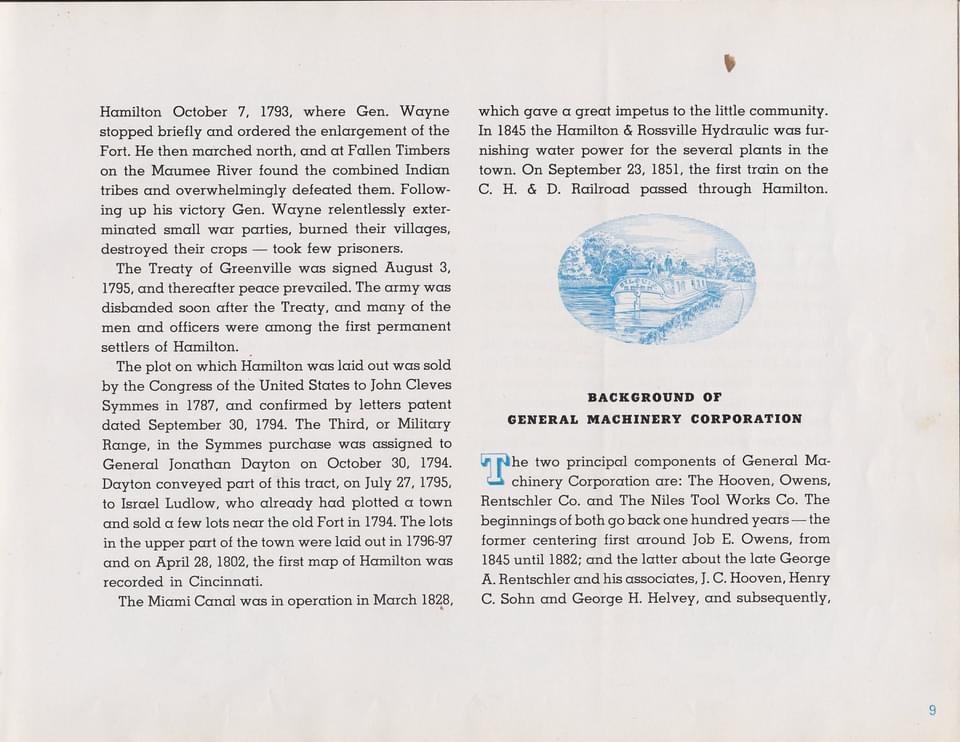 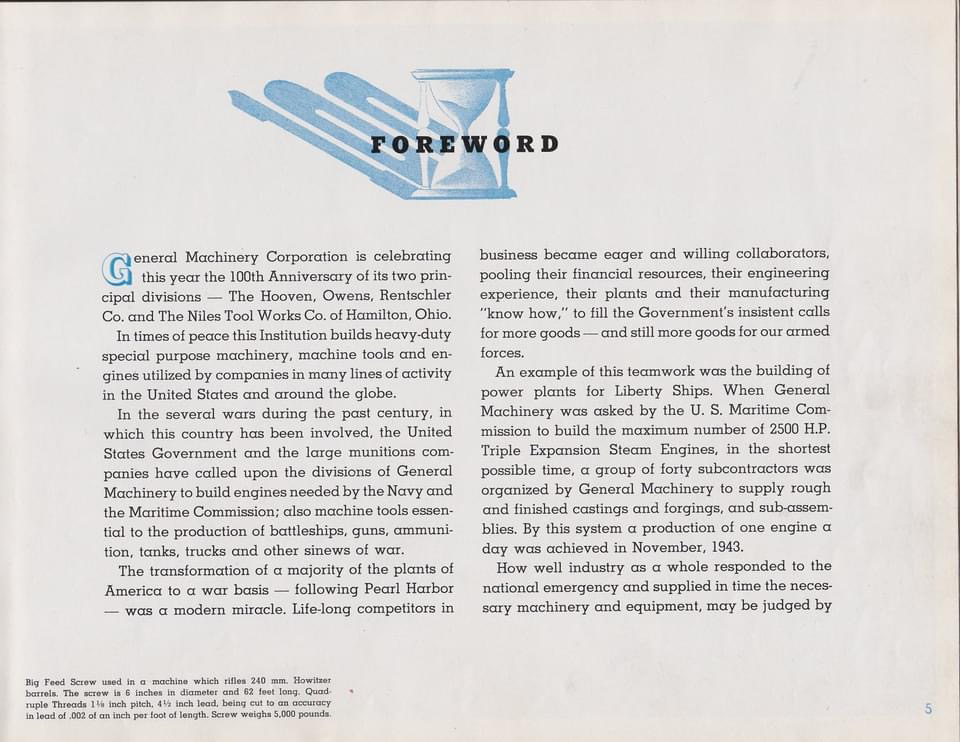 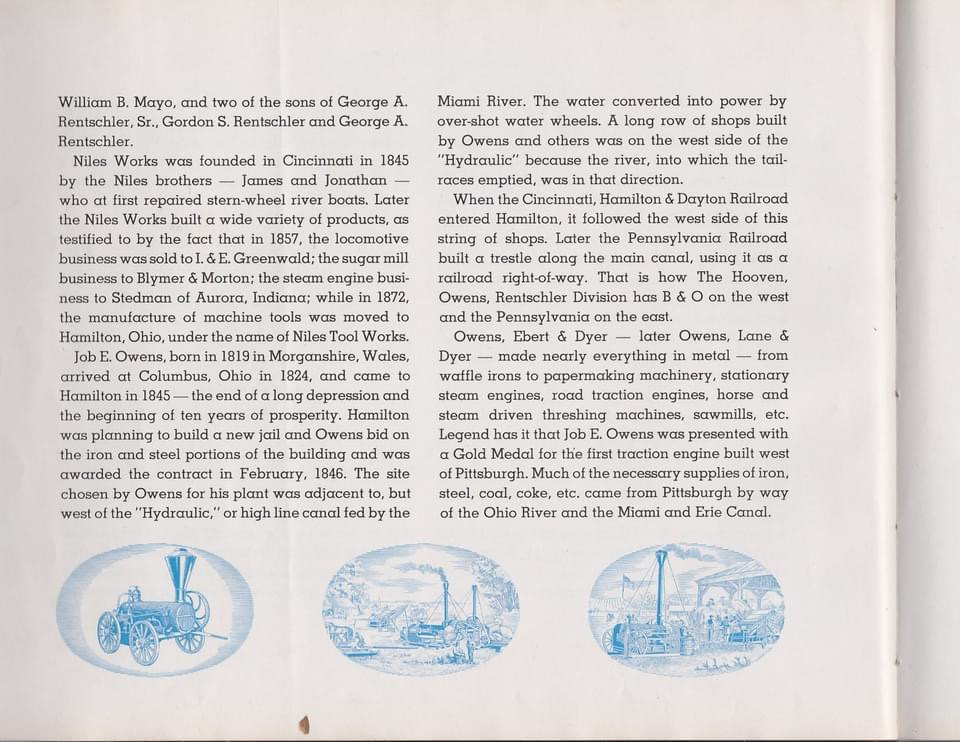 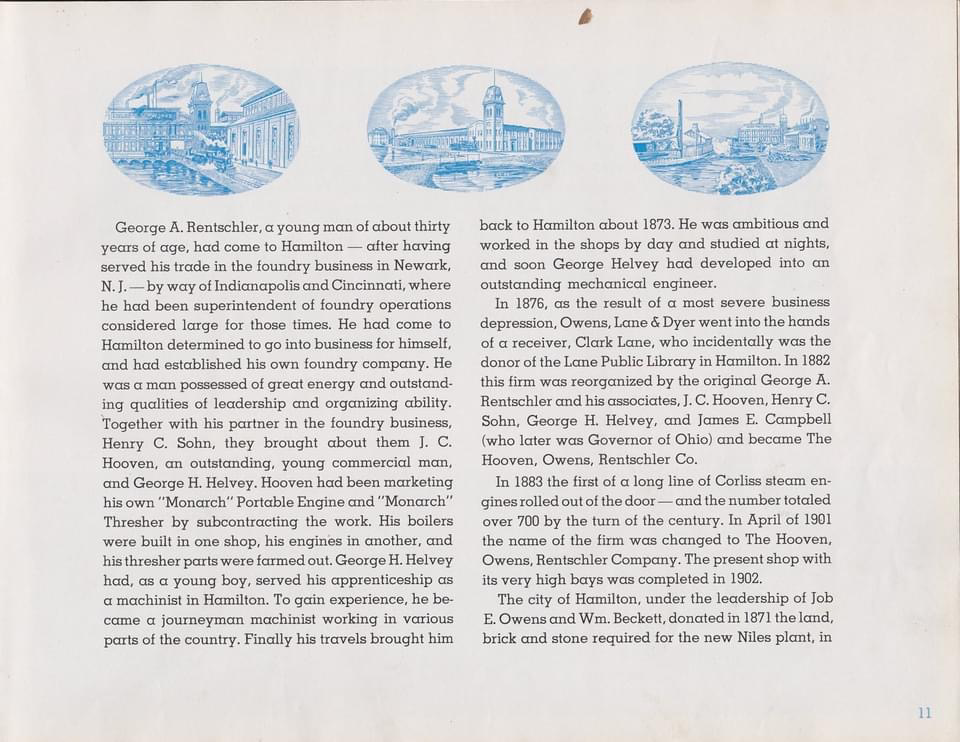 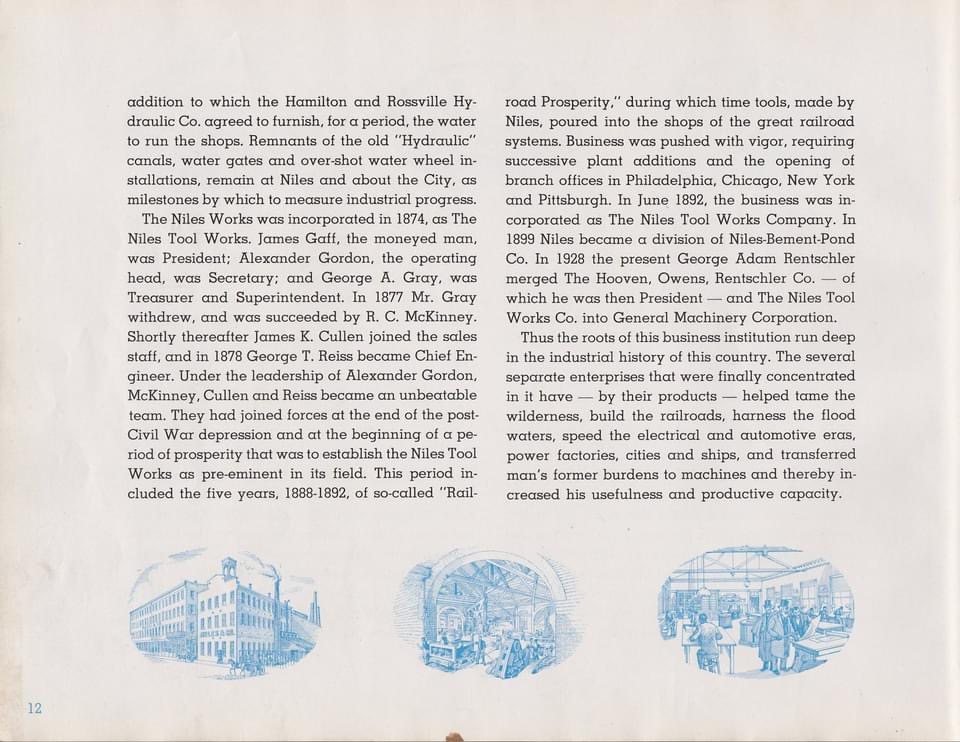 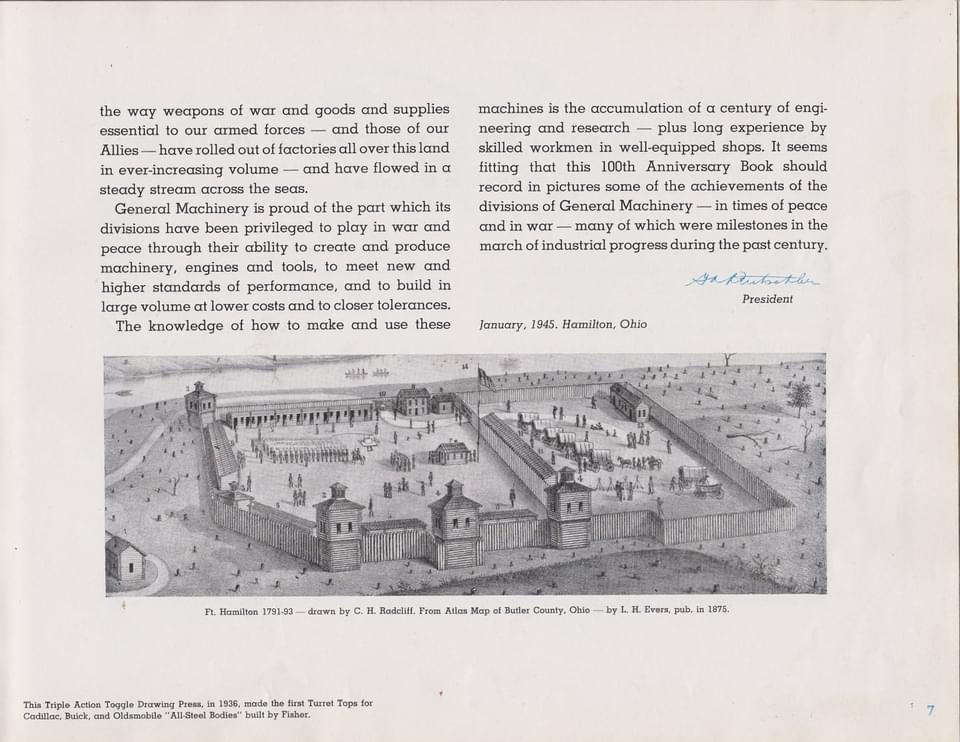