​A cemetery doesn't seem to be the proper place for a circus parade, but many Hamiltonians saw such an unlikely procession in the summer of 1872 when P. T. Barnum's circus visited. The unusual parade preceded the burial of Charles K. Carter in Greenwood Cemetery Sunday, July 14.

The 32-year-old circus employee had drowned the previous morning, but, true to show business tradition, two shows were presented the afternoon of Saturday, July 13.

Those events were recounted by a witness, J. M. Traber, when the Barnum & Bailey Circus stopped here in May 1911.

His fame started building in 1842 when Barnum opened the American Museum in New York City, featuring a series of curiosities and humorous shows. In 1850, Barnum promoted Jenny Lind's successful concert tour of America.

His circus — billed as "the Greatest Show on Earth" — opened in 1871 in Brooklyn, N. Y. Ten years later, Barnum and his toughest competitor merged as the Barnum & Bailey Circus.

A large ad in the Hamilton Telegraph promoted the July 13 show here as "P. T. Barnum's Great Traveling World's Fair" and the "Greatest Show on Record!"

It boasted of "Barnum's Magic City" in "six separate colossal tents," featuring "100 of the best performers in the world; 100,000 curiosities from all parts of the world, 500 living rare wild animals, birds, reptiles and marine monsters; 1,000 men and horses; 10 pavilions covering several acres, all of which will be exhibited for a single 50-cent ticket; children half price."

The circus arrived in three trains, each with 38 cars pulled by two locomotives.

Traber, in the 1911 interview, said it was the last time Barnum brought his entire show to Hamilton, and P. T. was here to supervise it. Show features recalled by Traber included Zip, That What-Is-It and the Fiji Island Cannibals.

The circus lot, according to Traber, "was a commons on the east side of the hydraulic . . . on Heaton Street, bounded by Fifth, Sixth and Vine streets.

At about 11 a.m. on Saturday, Carter led some circus horses to the hydraulic reservoir, north of the present Ford Boulevard.

While the horses were drinking, Carter fell from his mount. He is believed to have become tangled in lines and was kicked and held under the water when a horse stood on him.

Traber said searchers included Zip and the Fiji cannibals from the circus and several Hamilton swimmers. The body was found that afternoon. Coroner William Spencer held an inquest in the courthouse, ruling that it was death by accidental drowning.

Meanwhile, the circus continued, and the Hamilton Telegraph said "the prince of showmen carried off not less than $10,000 of the hard earned money of our people" and "hotels, ice cream saloons, lemonade stands . . . drove a thriving business."

Traber said "Barnum had his men keep the big top up, and the funeral services were held in this large tent." The Sunday afternoon rites were conducted by the Rev. D. J. Starr, pastor of the First Methodist Episcopal Church here from 1870 through 1873.

"The entire force of showmen attended in a body, also a number of Hamilton people," Traber said. "There were numerous floral tributes and it was probably the most unique and impressive funeral service ever held in this city,"

Then performers, wagons and caged animals followed Carter's body from the tent to his grave in an unusual circus parade.

Later, circus colleagues donated money for a marker for Carter's grave in Greenwood Cemetery. The inscription says it was "erected to his memory by his comrades."

Traber said "every season after that, when the show visited this city, the grave of the dead showman was visited and decorated by the show people as a tribute of loving remembrance and respect." 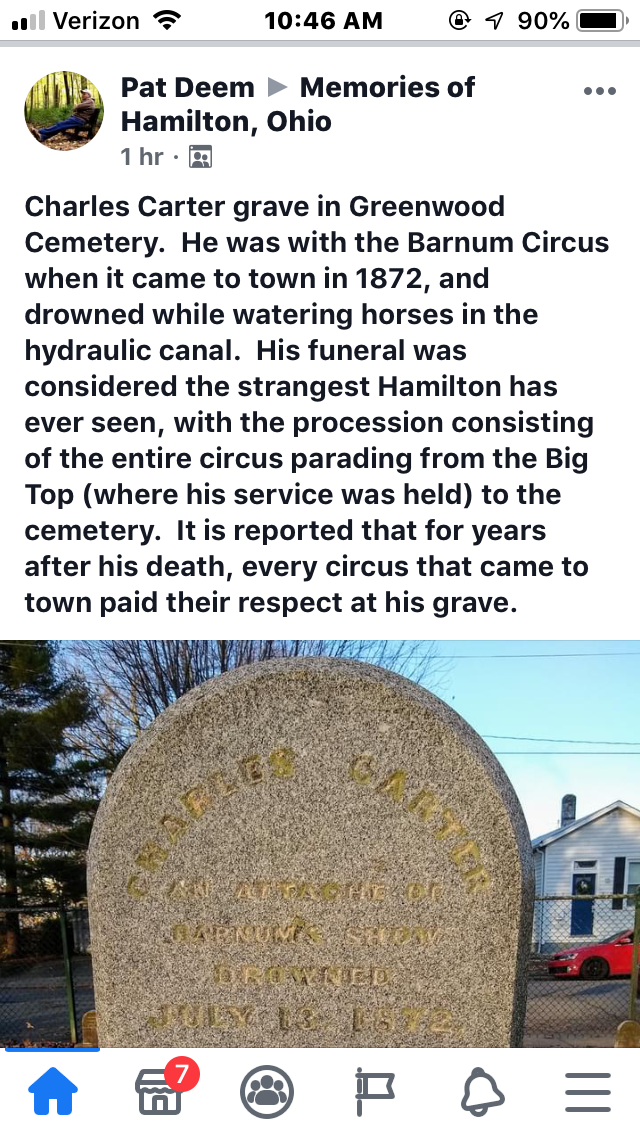 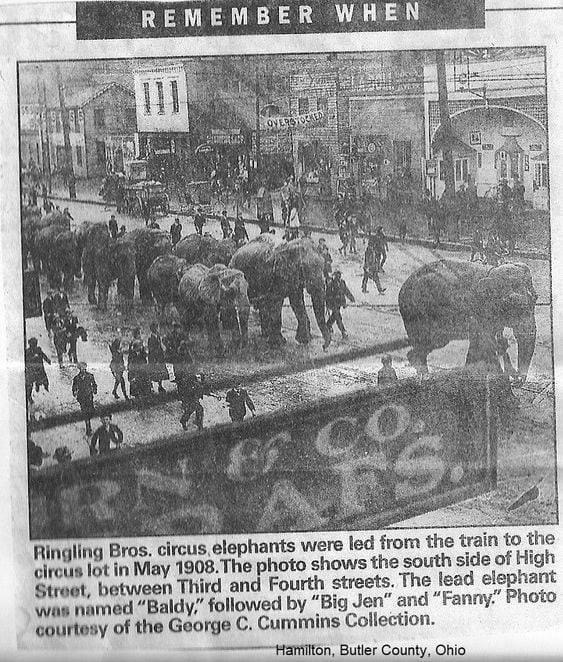