Hired by Symmes to survey his purchase. He was given John Filson’s share of Cincinnati when Filson was killed by Shawnees on the Great Miami River.
Israel Ludlow (1765 – January 1804) was a government surveyor who helped found Cincinnati, Dayton and Hamilton in southwest Ohio.
Israel Ludlow
Born1765
Morristown, New Jersey
DiedJanuary 1804
Cincinnati, Ohio
Resting placeSpring Grove CemeterySpouse(s)Charlotte ChambersIsrael Ludlow was born near Morristown, New Jersey in 1765.[1] In 1786, each of the thirteen states was to appoint a man to help survey the Seven Ranges in the easternmost portion of the Northwest Territory under the Land Ordinance of 1785. Ludlow was appointed to fill the vacant South Carolinasurveyorship.[2] Ludlow was one of two surveyors to stay in settlements near the Ohio River the winter of 1786–1787, and completed the survey of the seventh range, plats, and notes by August 1787.[3]
Later in 1787, a land company called the Ohio Company of Associates contracted with the Congress of the Confederation to buy a 1,500,000-acre tract along the Ohio River to the west of the Seven Ranges. Ludlow surveyed the north line of this tract that is known as Israel Ludlow's Survey.[4]
Virginia was granted lands between the Scioto River and Little Miami River in Ohio for bounties for her war veterans in a tract called the Virginia Military District. John Cleves Symmes purchased a large tract between the Little Miami River and the Great Miami Rivercalled the Symmes Purchase. Symmes had Ludlow survey a line between the sources of the Scioto and Little Miami to determine the boundary between the tracts, afterwards known as the Ludlow Line,[5] the subject of decades of legislation and court action due to the difficulty in determining the source of the Scioto River.[6][7]
On August 25, 1788, Matthias Denman, Robert Patterson, and John Filson entered an agreement to found Cincinnati, with Ludlow taking Filson's place upon his death.[8] The town was settled December 28, 1788 by Ludlow and twenty-six other people.[9] He surveyed the town by January 1789.[10] 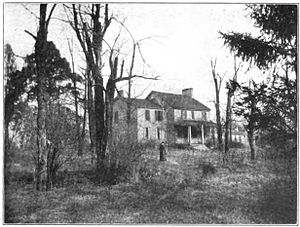