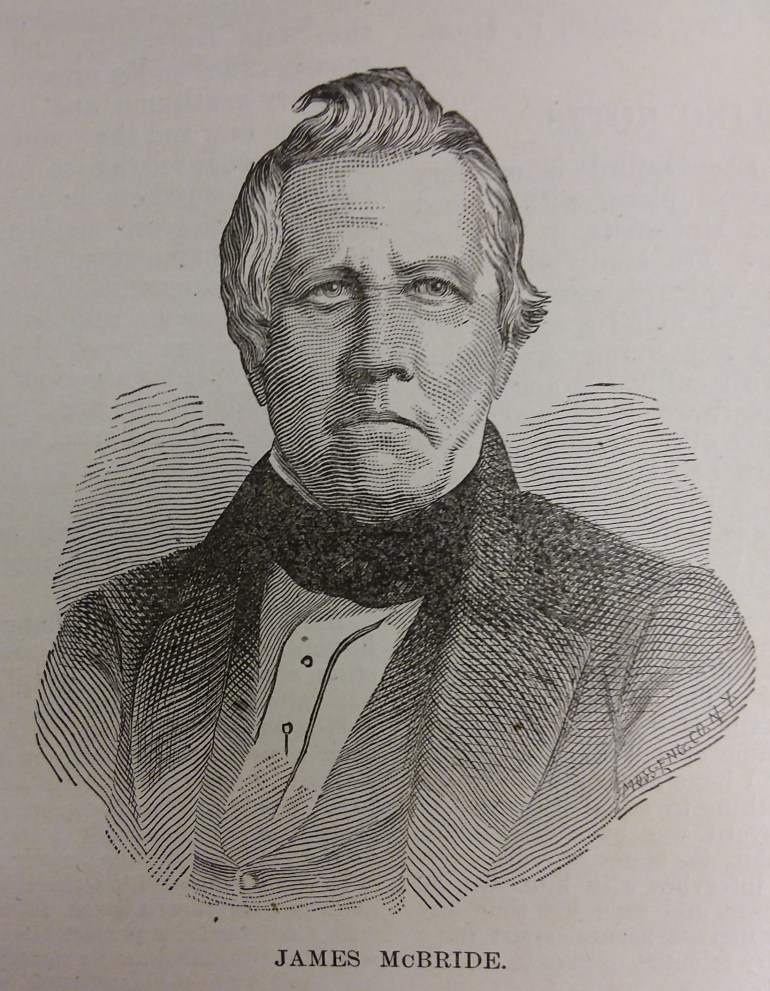 No formal education.
Designed the 1st Bridge.
Secretary of the Miami Bridge Company.
Wrote the first histories of Hamilton, Oxford, Butler County and Miami University.
Worked as a clerk for John Reily.
Helped Joseph Hough transport flour to New Orleans.
Was Butler County Sheriff for two terms.
Published the first newspaper on June 22, 1814
Started and ran the Hamilton House hotel where William Henry Harrison, Stephen A. Douglas, Henry Clay, John Breckinridge, Thomas Ewing, Dewitt Clinton, Thomas Corwin, Clement Laird Vallandigham, Anson Burlingame and General Winfield Scott stayed.
Drafted the state canal laws.
Worked for John Woods, auditor of state, as clerk of public works and handled all affairs pertaining to the canal.
He was on the committee to settle claims for damages to property due to the canal.
Helped fund the Hamilton Basin.
Wrote 3,000 pages of manuscript about early pioneers in the area.
Prepared an 1836 map of Butler County.
Charted the mounds in Butler County.
​He died 10 days after his wife Hannah. 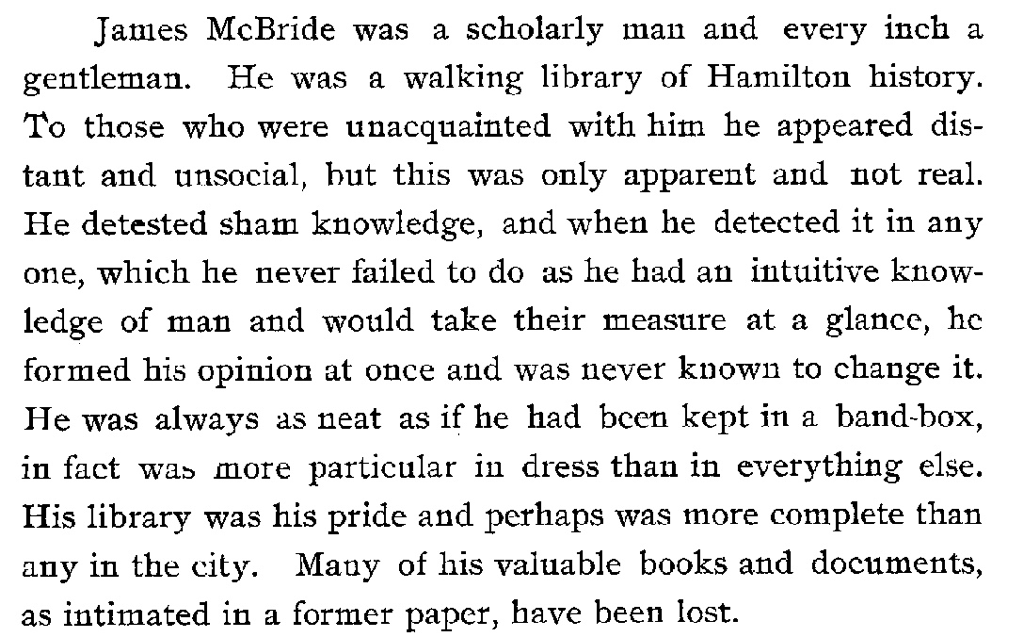 Despite a lack of formal education, James McBride played a major role in forming Miami University, leading Hamilton's development and capturing and preserving the region's history.

McBride, an only child, was born Nov. 2, 1788, near Greencastle, Pa. The next year, his father, also James McBride, was killed by Indians while in Kentucky.

Exactly when McBride arrived in Hamilton is uncertain — probably 1807, according to some accounts. He came with no formal education, but with a wealth of self-acquired knowledge and skills. As an adult, he amassed a personal library of about 5,000 books and promoted the formation of local schools.

His fine handwriting is believed to have helped him land his first job here — as a clerk for John Reily, a pioneer here and a longtime jack-of-all-trades public servant, who also was instrumental in establishing Miami University.

By 1811, McBride had started an enduring participation in town government, usually as a clerk, recorder or treasurer.

In 1812, he joined Joseph Hough, a pioneer merchant, in transporting Butler County flour to New Orleans via a flatboat on the Great Miami, Ohio and Mississippi rivers.

McBride, a quiet, modest and charitable man, was only 25 when elected to the first of two terms (1813-1817) as Butler County sheriff. While holding the office, he married Hannah Lytle. They would become the parents of three sons and two daughters.

In 1814 he acquired a printing press and type, which led to publication of the first newspaper in Hamilton, the Miami Intelligencer, started June 22 of that year.

Meanwhile, McBride paid $300 to the heirs of Israel Ludlow for prime land at the northwest corner of Second and High streets, where McBride built Hamilton's first hotel.

Early historians disagree on when the Hamilton House was built (either 1812 or 1820). It is known that it was erected by Joel Kennedy for McBride as a two-story hotel, and expanded in 1828 to three floors and enlarged again after McBride's death. It stood until April 1897, when it was demolished.

The hotel — which McBride owned until his death in 1859 — was the social, political and business center of Hamilton during much of its existence, and many prominent national names graced its guest register.

For much of the time from 1821 until 1835, the hotel was known as the Blair House or Blair's Hotel because it was operated by Thomas Blair, who was McBride's brother-in-law. Both had married daughters of Judge Robert Lytle.

McBride housed his library and extensive archeological and Indian collections in a rear room of the hotel.

As McBride was developing the hotel, he plunged into another venture that was to bring new business and more visitors to Hamilton.

The private Miami Bridge Company was authorized Feb. 20, 1816, by the Ohio General Assembly. McBride was one of four Hamilton men who raised $30,000 through the sale of $50 shares.

McBride was one of 59 charter subscribers, secretary of the company and in 1817 an original director, serving in these positions for many years.

Because there were no experienced bridge builders in the area, McBride functioned as a civil engineer, completing maps and architectural drawings for the Miami Bridge, which connected Hamilton and Rossville in 1819, replacing ferries.

He was paid $296.93 for his work, which included horseback trips to Chillicothe and Philadelphia to observe bridges there.

The hotel, bridge and newspaper were only three of many local projects that were the fruits of McBride's talents and drive.

(This is the second of three columns on James McBride, a Butler County pioneer.)

While James McBride and other Hamilton and Rossville leaders were planning the first bridge over the Great Miami River in 1817, a more elaborate construction project in New York attracted their attention.

It was the 363-mile Erie Canal, which connected Albany on the Hudson River and Buffalo on Lake Erie, making it quicker and cheaper to haul goods between Ohio and Atlantic ports.

The Erie Canal caused "canal fever" in Ohio, and McBride was among those infected in Hamilton.

The businessman was vitally interested in the early 1820s as the state plotted similar waterways linking Lake Erie and the Ohio River: the 308-mile Ohio-Erie Canal between Cleveland and Portsmouth and the 248-mile Miami-Erie canal between Toledo and Cincinnati. The latter passed through Butler County.

"James McBride stands foremost among Hamilton men connected with the canal," said Alta Harvey Heiser in her book, Hamilton in the Making .

She said McBride "drafted the state canal laws, was a member of the first board of commissioners, and during 1845 and 1846, as chief clerk of public works in the office of John Woods, auditor of state, he handled all affairs pertaining to the canal."

When the Miami-Erie Canal opened, McBride was the Butler County representative on a three-member committee appointed to settle claims for damages to crops and property and other losses suffered by area residents during construction of the waterway. He also completed some surveys of canal land for the state.

McBride put up $100 in 1828 to help pay the local share of building the Hamilton Basin, a waterway connecting Hamilton to the Miami-Erie Canal, a mile east of town.

The Hamilton Basin opened in 1829, the same year McBride was involved in the formation of the Hamilton, Rossville and Richmond Turnpike Company, incorporated in January 1830.

He also had a hand in its construction, which began in 1838 under the Hamilton, Rossville, Darrtown, Oxford and Fairhaven Turnpike Company.

In December 1831, McBride prepared plans for county infirmary buildings, the first facilities for the care of the area's indigent citizens.

Hamilton — previously governed by a board of trustees — was chartered Feb. 23, 1833, and the office of mayor was created. McBride was the first to assume that responsibility. During his four-year tenure, he was involved in the codification of town ordinances.

McBride, who had been a state legislator from 1822-1823, returned to Columbus in 1845 as an assistant to Woods, of Hamilton, who had been elected state auditor. McBride returned to Hamilton a year later to serve as Butler County clerk of courts from 1846-1852.

One of the last civic projects to involve McBride was the Cincinnati, Hamilton & Dayton Railroad, incorporated by the Ohio General Assembly March 2, 1846.

However, financing was an obstacle, and McBride was one of only 11 Hamilton men who purchased stock in the railroad, completed into Hamilton in September 1851.

During his 52-year residency, McBride recorded local history while he was making it. Among his many legacies were the first histories of Hamilton, Oxford, Butler County and Miami University. He interviewed pioneers, collected records, compiled notes and eventually produced about 3,000 pages of manuscript.

His works — both published posthumously — included two volumes of Pioneer Biography of Butler County and a smaller effort, Notes on Hamilton. In 1836, he prepared a detailed map of Butler County.

He also explored and charted numerous mounds built in Butler County by prehistoric American Indians, and shared his findings and observations with archeologists and other writers.

(This is the last of three columns on James McBride, a Butler County pioneer.)

A consistent theme during James McBride's years of public service and varied private ventures was his interest in Miami University. Hamilton's first mayor contributed 50 years of service to the university in nearby Oxford.

The university's origin dates to the passage of the Land Ordinance of 1785, the Northwest Ordinance in 1787 and John Cleves Symmes' application to buy two million acres from the U. S. government.

Symmes' 1788 agreement included reserving an entire township, "for the purpose of an academy or college," in the tract north of the Ohio River between the Great and Little Miami rivers. Symmes failed to live up to the promise. Instead, the state and federal governments eventually cooperated to fill the void.

The Ohio General Assembly passed an enabling act Feb. 17, 1809, authorizing the creation of Miami University and appointing trustees to manage the details.

"Taking the secretary's notes in his firm, clear hand was James McBride, a robust and versatile young man of 23," noted Walter Havighurst in The Miami Years. "He had little schooling, but a wide-ranging mind and lively sense of history."

Oxford Township in Butler County was designated as the site for the school, but not before determined efforts by other communities within the Symmes Purchase, especially Cincinnati.

In 1818 a grammar school — not a college — opened in Oxford in a portion of a building that later would be known as "Old Main," and eventually Harrison Hall. It was named Franklin Hall in 1818.

Meanwhile, Miami's removal from Oxford was an issue again as Cincinnati interests sought the college. A Cincinnati newspaper referred to the Oxford institution as "our college in the gloom of the beechwood flats, where the footsteps of enlightenment and liberal patronage cannot penetrate, and from whence not a ray of science will be reflected for a century."

In January 1822, a bill was introduced in the Ohio General Assembly that would have moved Miami to Cincinnati and left the Oxford institution merely a preparatory school.

Joel Collins, an Oxford resident and member of the assembly since 1817, led Butler County resistance in the legislature.

"To strengthen their defense for the future, the Oxford residents elected doughty James McBride to the House of Representatives," reported Havighurst in The Miami Years. Collins and McBride were successful, and Miami remained in Oxford. Subsequent attempts to move Miami also failed.

Finally, on Nov. 1, 1824, the college opened for 20 students with a president, Robert Hamilton Bishop, and two faculty members, with most of its functions in a three-story, 60-by 85-foot brick building. Ten years later, Miami University had a faculty of seven teaching 234 students.

McBride watched Miami's growth until his final days. His wife of 45 years, Hannah Lytle McBride, died Sept. 23, 1859. He passed away 10 days later — less than a month before his 71st birthday.

McBride, who is buried in Greenwood Cemetery, was president of Miami's board of trustees when he died.

In addition to his contributions to Miami, McBride played an integral leadership role in the development of Hamilton's first hotel, bridge, railroad and newspaper, as well as the city's connection to the Miami-Erie Canal, the county's first infirmary and local road construction. He also gave the county years of service as a state legislator, county sheriff, clerk of courts and local historian.