Born in 1783. Arrived in Hamilton in 1806 and set up shop at the present St. Mary’s Church.
There were only about 100 habitants in Hamilton and Rossville the time.
​The only other store in Hamilton was that of John Sutherland.
​ 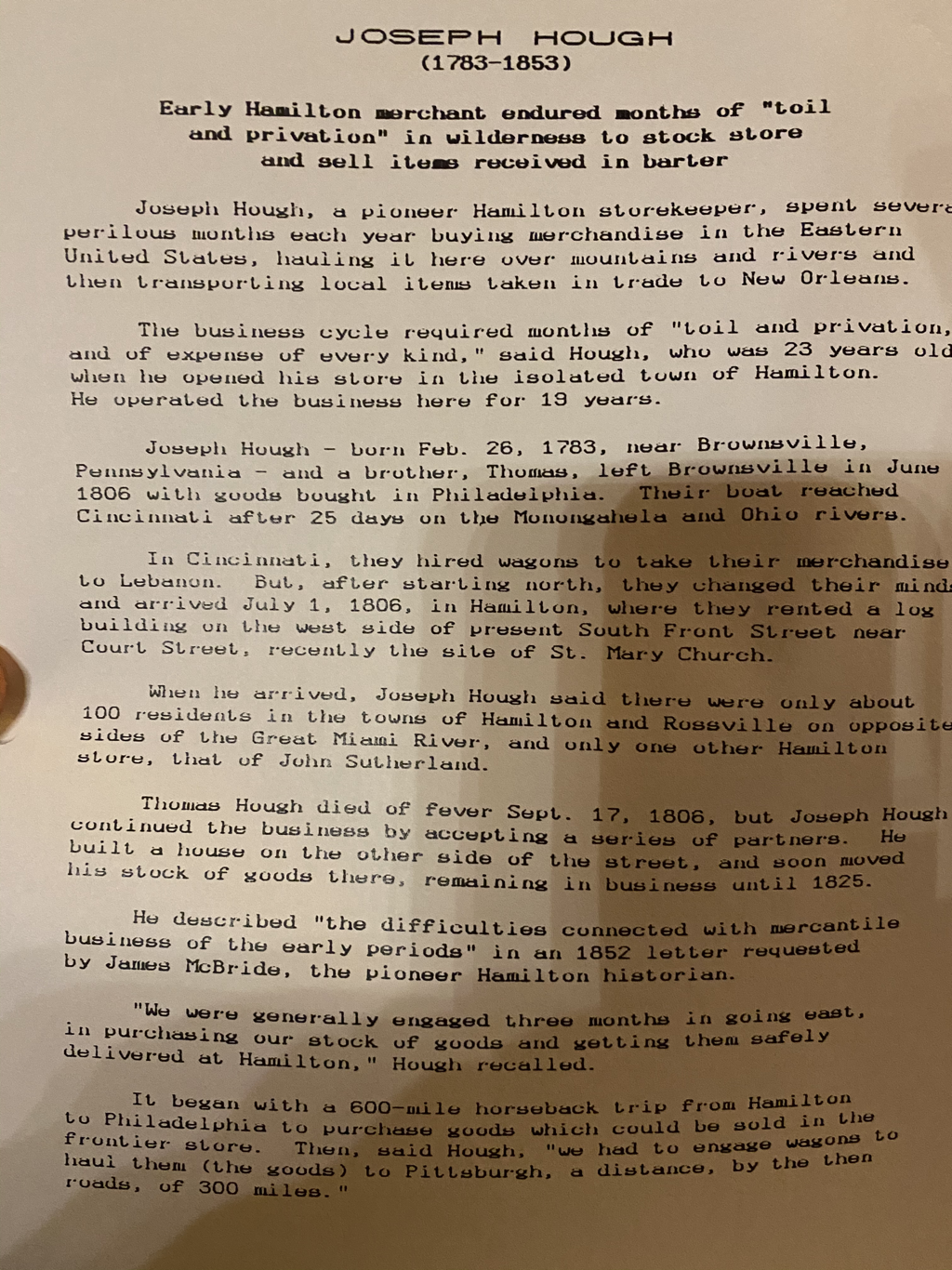 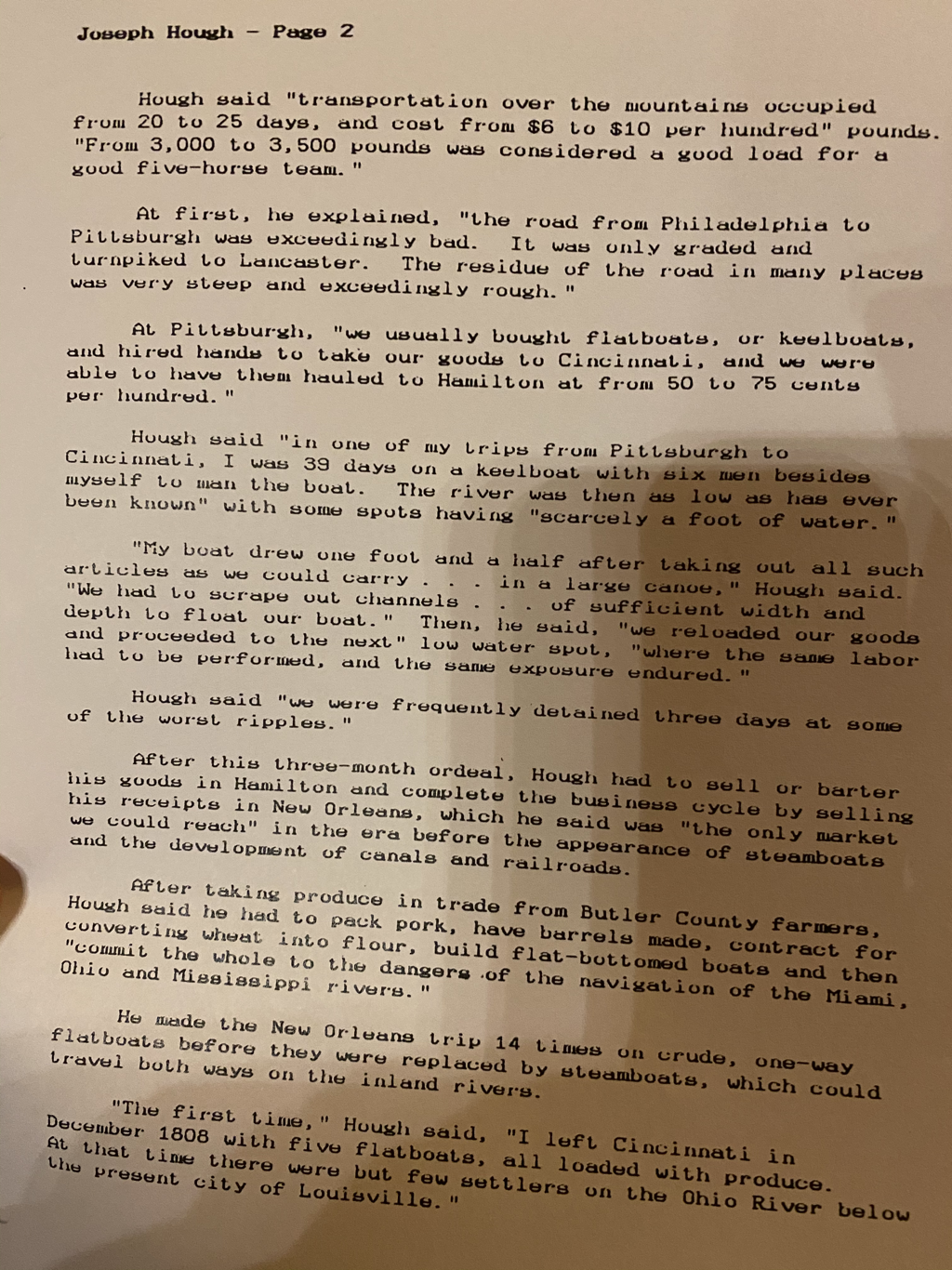 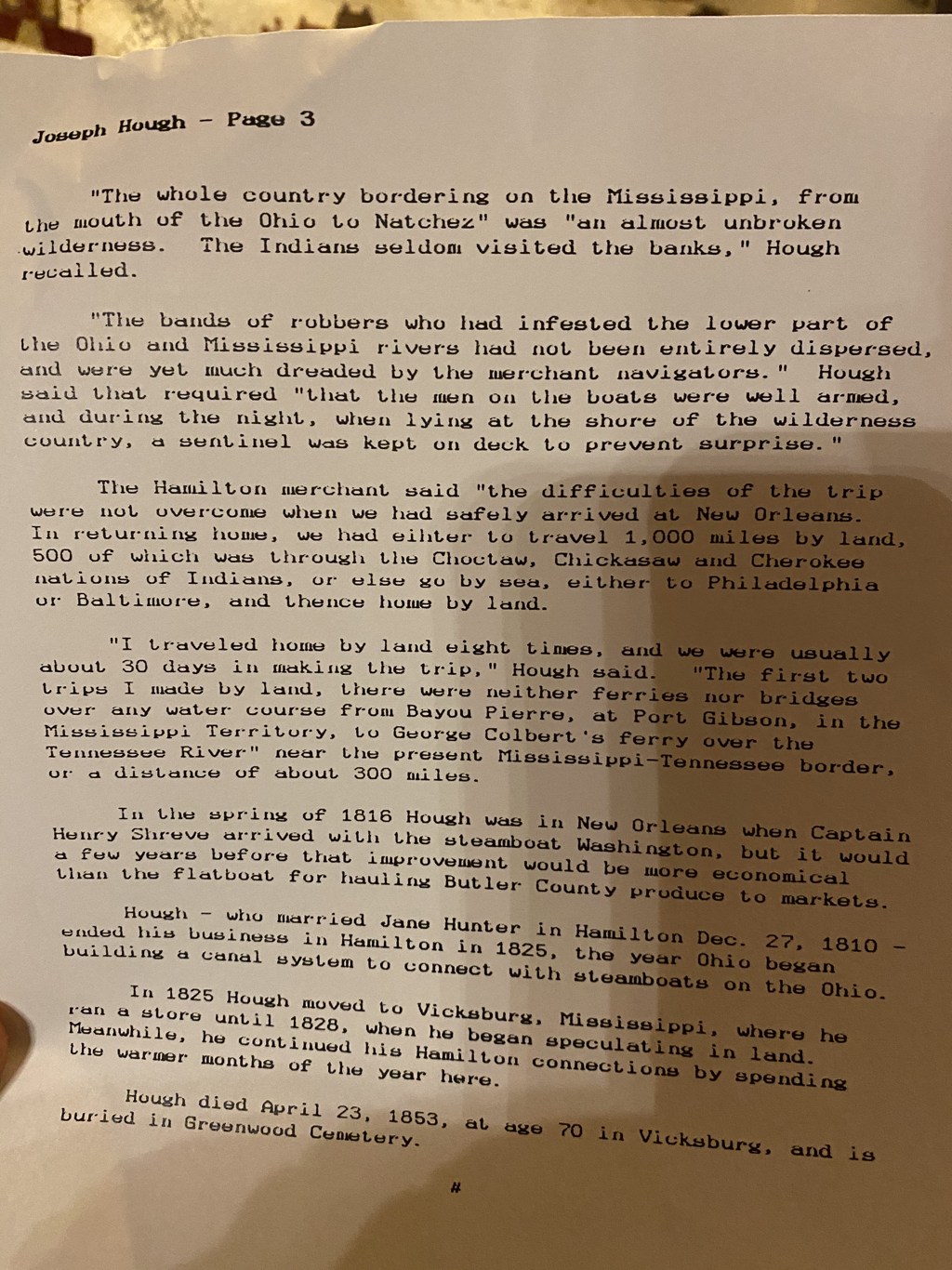 Was Elected president of the Miami Bridge company.
​Retailing operations — now with the advantages of instant communication and overnight deliveries — have come a long way since the days of Joseph Hough, a pioneer Hamilton merchant.

He described "the difficulties connected with the mercantile business of the early periods" in an 1852 letter requested by James McBride, a pioneer Hamilton historian.

This column (the first of two) recounts the first phase of Hough's business cycle — bringing goods from Philadelphia.

It was called "three months . . . of toil and privation, and of expense of every kind" by Hough, who came to Hamilton at age 23 and was in business here 19 years.

Joseph Hough — born Feb. 26, 1783, near Brownsville, Pa. — and a brother, Thomas, left Brownsville in June 1806 with goods bought in Philadelphia. Their boat reached Cincinnati after 25 days on the Monongahela and Ohio rivers.

In Cincinnati they hired wagons to take their merchandise to Lebanon. But, after starting north, they changed their minds and arrived July 1, 1806, in Hamilton, where they rented a log building on the west side of South Front Street near Court Street, recently the site of St. Mary Church.

Hough said there were only about 100 residents in the towns of Hamilton and Rossville (west of the Great Miami River), and only one other Hamilton store (operated by John Sutherland).

Thomas Hough died of fever Sept. 17, 1806, but Joseph Hough continued the business by accepting a series of partners. He built a house on the other side of the street and soon moved his stock of goods there, remaining in business until 1825.

"We were generally engaged three months in going east, in purchasing our stock of goods and getting them safely delivered at Hamilton," Hough recalled.

"We had to travel on horseback from Hamilton to Philadelphia a distance of 600 miles, to purchase our goods," Hough wrote. Then "we had to engage wagons to haul them to Pittsburgh, a distance, by the then roads, of 300 miles."

"Their transportation over the mountains occupied from 20 to 25 days, and cost from $6 to $10 per hundred."

He said at first "the road from Philadelphia to Pittsburgh was exceedingly bad. It was only graded and turnpiked to Lancaster. The residue of the road in many places was very steep and exceedingly rough."

At Pittsburgh, "we usually bought flatboats, or keelboats, and hired hands to take our goods to Cincinnati, and we were able to have them hauled to Hamilton at from 50 to 75 cents per hundred," Hough explained.

Hough said "in one of my trips from Pittsburgh to Cincinnati, I was 39 days on a keelboat with six men besides myself to man the boat. The river was then as low as has ever been known" with some spots having "scarcely a foot of water."

"My boat drew one foot and a half after taking out all such articles as we could carry ... in a large canoe," Hough said. "We had to scrape out channels ... of sufficient width and depth to float our boat." Then "we reloaded our goods and proceeded to the next" low spot, "where the same labor had to be performed, and the same exposure endured."

Hough said "we were frequently detained three days at some of the worst ripples."

After this three-month ordeal, Hough had to sell or barter his goods in Hamilton and complete the cycle by selling his receipts in New Orleans. Next week's column will cover those phases of Hough's business year.

(This is the second of two columns on the business career of Joseph Hough.)

This required merchants receiving agricultural goods "to take the farmers' produce and send or take it to New Orleans, the only market we cold reach," explained Joseph Hough, who started operating here in this manner in 1806.

Hough's business cycle began with a three-month round trip. He went to Philadelphia to buy goods, hauled them in wagons over the Appalachians to Pittsburgh, transported them via flatboats on the Ohio River to Cincinnati and carried them to Hamilton.

Hough said "our difficulties were by no means all overcome" when goods arrived at his Hamilton store.

"To sell them, we were compelled not only to do the ordinary duties of merchants, and to incur its ordinary responsibilities and risks, but we had to become the produce merchants of the country."

Hough — in an explanation to a Hamilton historian — said he had to pack pork, have barrels made, contract for converting wheat into flour and build flat-bottomed boats, and then "commit the whole to the dangers of the navigation of the Miami, Ohio and Mississippi rivers."

He made the trip to New Orleans 14 times on crude, one-way flatboats before two-way steamboats replaced them.

"The first time . . . I left Cincinnati in December 1808 with five flatboats, all loaded with produce," Hough recalled. "At that time there were but few settlers on the Ohio River below the present city of Louisville."

"The whole country bordering on the Mississippi, from the mouth of the Ohio to Natchez," was "an almost unbroken wilderness. The Indians seldom visited the banks, except at a few points where the river approached the high lands."

"The bands of robbers who had infested the lower part of the Ohio and Mississippi rivers had not been entirely dispersed, and were yet much dreaded by the merchant navigators of those rivers so that the men on the boats were well armed, and during the night, when lying at the shore of the wilderness country, a sentinel was kept on deck to prevent surprise, "Hough said.

The Hamilton merchant said "the difficulties of the trip were not overcome when we had safely arrived at New Orleans."

"In returning home we had either to travel 1,000 miles by land, 500 of which was through the Choctaw, Chicksaw and Cherokee nations of Indians, or else go by sea, either to Philadelphia or Baltimore, and thence home by land."

"I traveled home by land eight times, and we were usually about 30 days in making the trip," Hough said.

"The first two trips I made by land, there were neither ferries nor bridges over any water course from Bayou Pierre, at Port Gibson, in the Mississippi Territory, to George Colbert's Ferry over the Tennessee River near the Mississippi-Tennessee border, or about 300 miles.

"When we came . . . to a water course which would swim with our horses, we would throw our saddlebags and provisions over our shoulders and swim our horses over."

Hough said during those trips over the Natchez Trace "we were compelled to camp without tents, regardless of rain or any other unfavorable weather, and to pack provisions sufficient to last us through the Indian nations."

In the spring of 1816, Hough was in New Orleans when Captain Henry Shreve arrived with the steamboat Washington, which "was preparing for her trip to Louisville."

"The price for a cabin passage was $150 and for freight $5 per hundred pounds," said Hough, who "regarded the charge most exorbitant, and in preference, bought a horse and went home by land."

But he spent the warmer months at his Hamilton property and a farm south of the city. Hough, who died April 23, 1853, at age 70 in Vicksburg, is buried in Hamilton. 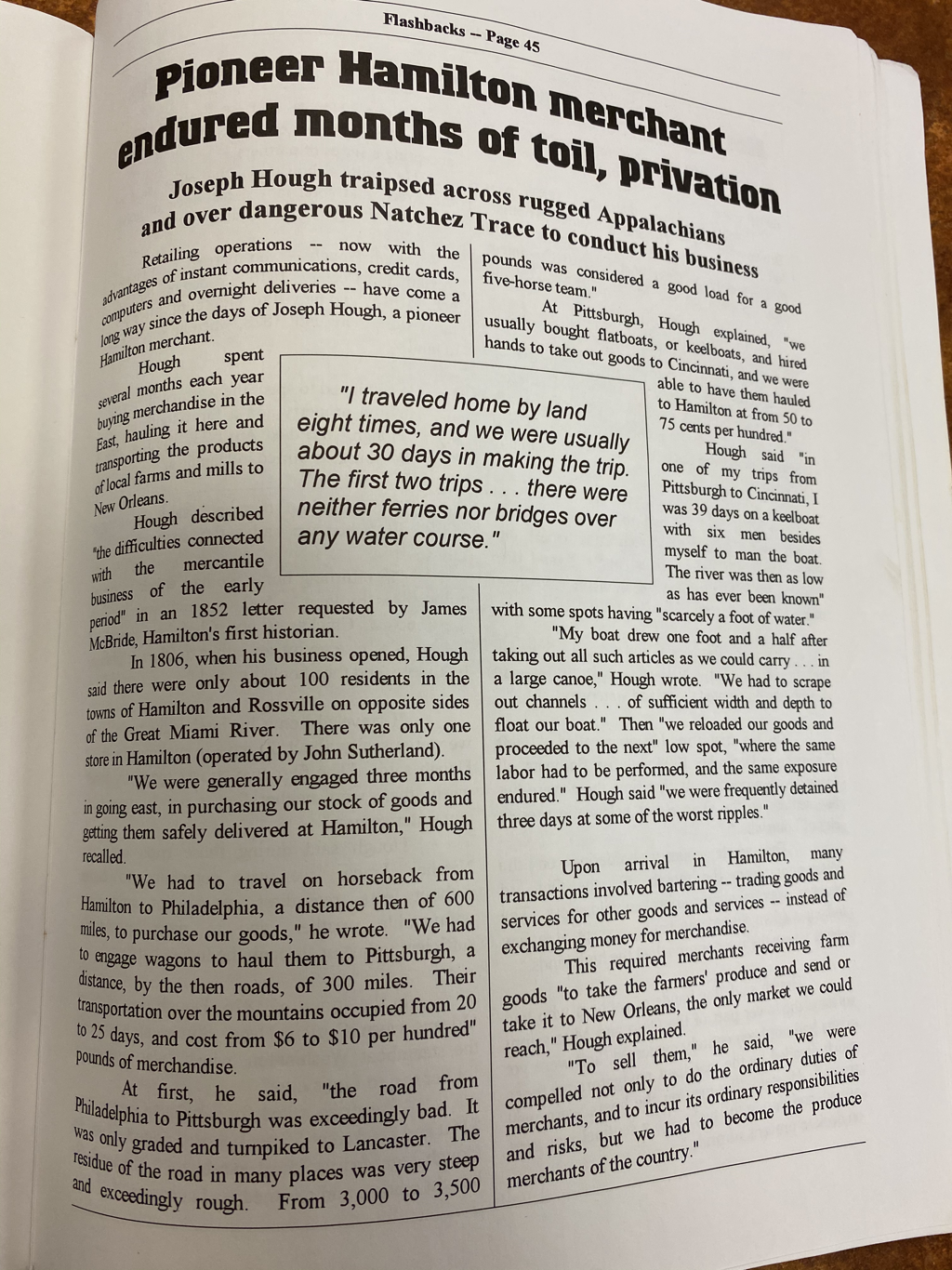