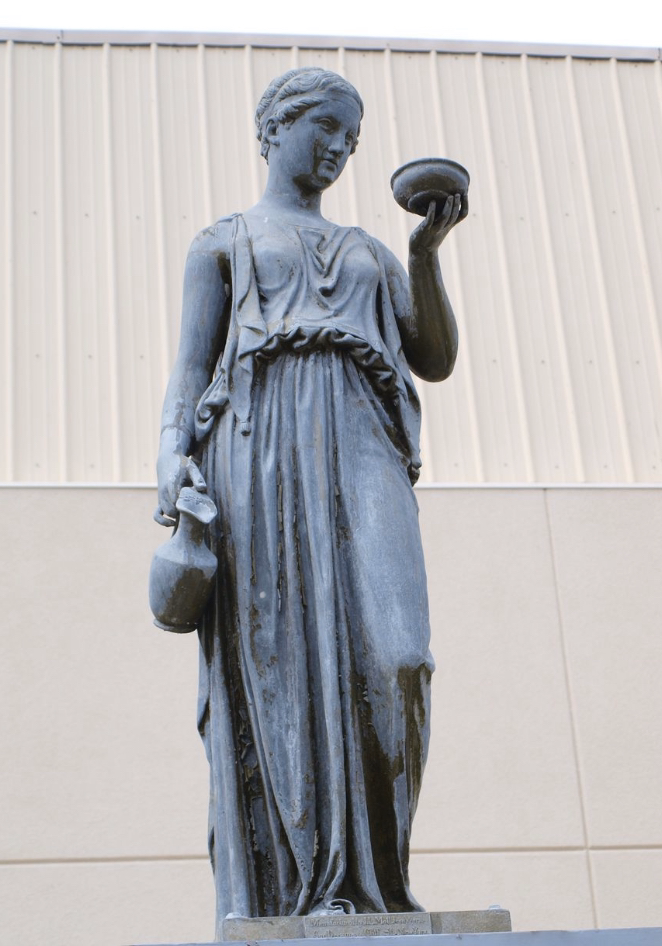 memorialdrinkingfountains.wordpress.com/2018/08/14/hamiltons-hebe-fountain/?fbclid=IwAR1dQh74BRSKDRs9mpikjPO5B8OgjpTvmide2v5MQFNzS-rcJwc5JOqKjog
Hamilton's first public fountain, Hebe (pronouced HEE-bee) was a gift to the city of Hamilton in 1890. It is a replica of a fountain and statue in Copenhagen, Denmark, designed by a Danish sculptor, Bertel Thorvaldsen (1774-1844). He also created a statue of Hebe which is in The Louvre in Paris, France.In mythology, Hebe was the daughter of Zeus and Hera and was said to have the power to make old people young again. In some sources, she was an attendant to Aphrodite, the goddess of beauty, and a wife to Heracles.
The August unveiling of The Hamilton Gateway at One Renaissance Center signified the city’s official status as "The City of Sculpture." Less than a block away is one of the community’s oldest sculptures. It is the statue-topped fountain in front of the of the First National Bank of Southwestern Ohio, erected in 1890. It is 14 years older than Hamilton’s most prominent sculpture, the Civil War soldier that crowns the Soldiers, Sailors and Pioneers Monument.

When installed in 1890, the downtown fountain provided drinking water for both people and animals. After 38 years of providing refreshment, it was removed in 1928 to make way for construction of a new First National Bank building. For the next 47 years, it stood in the yard of a private residence on Haldimand Avenue on Hamilton’s West Side.

It was acquired by the bank in mid 1970s in preparation for observance of the United States Bicentennial. In 1976, after restoration work at the Hamilton Foundry, the fountain and statue were placed on the north side of High Street, just east of Third Street.

The female figure is Hebe (pronounced HEE bee), a goddess in Greek mythology who was the daughter of Zeus and Hera. The Hamilton piece is a replica of a fountain and statue in Copenhagen, Denmark. Thorvaldsen also created a statue of Hebe that is in The Louvre in Paris, France. It is considered one of his best known works.

Hebe’s role in Greek mythology has been described in various ways, including the nymph of streams and brooks, the goddess of beauty and the goddess of youth. In the latter role, she had the power to make old people young again.

Hercules married her after he was made a god. Hebe ended the long quarrel between Hercules and his stepmother, Hera.

Homer in The Iliad, Book IV, said: "The gods sat down for a conference with Zeus in the Hall of the Golden Floor. The lady Hebe, acting as their cupbearer, served them with nectar and they drank to each other’s health from tankards of gold as they looked at the city of Troy."

According to other sources, Hebe -- an attendant to Venus -- was the goddess of beauty.

Thorvaldsen (or Thorwaldsen) was born in Copenhagen in 1774, and educated in the city’s Royal Academy. In 1797 he went to Italy to study classical sculpture, living in Rome until 1844 and becoming a leading figure in the classical revival.

His most famous works are allegorical reliefs and statues of classical subjects, such as Cupid and Psyche (1807, Thorvaldsen Museum, Copenhagen). He sculpted the Tomb of Pius VII (1824-31, Saint Peter's Basilica, Rome) and the celebrated outdoor Lion of Lucerne (1819-21, Lucerne, Switzerland). The Lucerne sculpture -- a reclining lion carved into a sandstone cliff -- honors the Swiss Guards who fell during the French Revolution. More than 700 Swiss officers and soldiers died while defending Tuileries Palace and King Louis XVI, Marie-Antoinette and their children in 1792 when a Paris mob stormed the stronghold.

The Alexander frieze of 1812 in the Palazzo del Quirinale, Rome, reportedly modeled in only three months in anticipation of a visit by Napoleon, has been described as "an example of the feverish energy with which he could at times work."

His religious sculptures include the series of statues of Christ and the Twelve Apostles (1821-27) in the Vor Frue Kirke in Copenhagen. He also sculpted numerous portrait busts of distinguished contemporaries.

His collection of antique sculpture and many of his own works are in the Thorvaldsen Museum in Copenhagen, while a copy of his beloved Hebe graces downtown Hamilton.