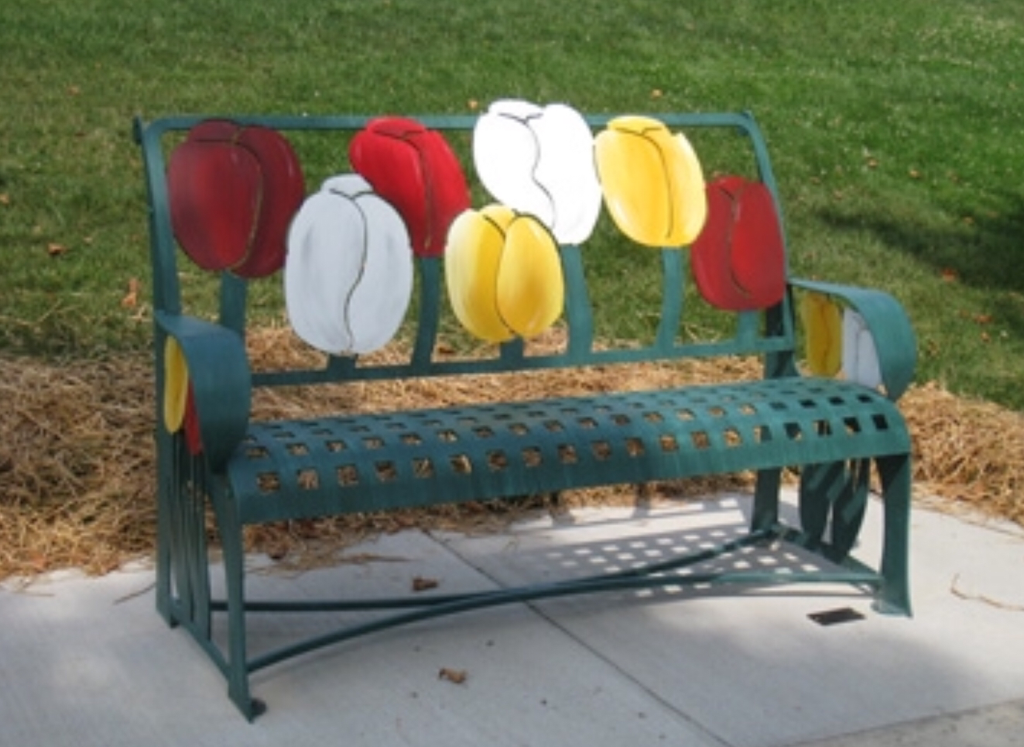 Rick Flick designed the bench for Theresa because of her love of that flower. The artist took the original design and adapted it to the bench.Theresa fought Type 1 Diabetes from age 5. She had kidney complications in her 20’s and after 2 kidney transplants, the first one in 1995 which was eventually successful until it started to fail in 2004, she received another transplant from Rick’s sister, Judy Fritz, but it never did perform as it should have.
After several complications, heart, brain surgery etc. she passed away in 2008 at age 46. Through it all, anyone who knew her could tell you, she was a fighter, trying so hard to live to be mother to her young son, Ben.
Her fight to live was an inspiration to her family and friends...That’s why the bench was created. To continue to inspire all who knew her.

After studying medicine for two years at Hiram College in Hiram, Ohio, Drumm decided to pursue a career in art. He transferred to Kent State University where he received a B.F.A. and an M.A.
In the late 1950s Drumm pioneered the use of cast aluminum as an artistic medium. In addition he has been a pioneer in the use of contemporary building materials, and techniques for the creation of Arts and crafts.
In 1960 Drumm opened his own studio, as a full time practicing Sculptor and designer/craftsman near the University of Akron in Akron, Ohio. In 1971, together with his wife, Lisa Drumm, he expanded the studio to incorporate a one-room gallery. Since then the enterprise has grown extensively and now embraces eight buildings, providing gallery facilities for over 500 artists and studio space for three resident artists.