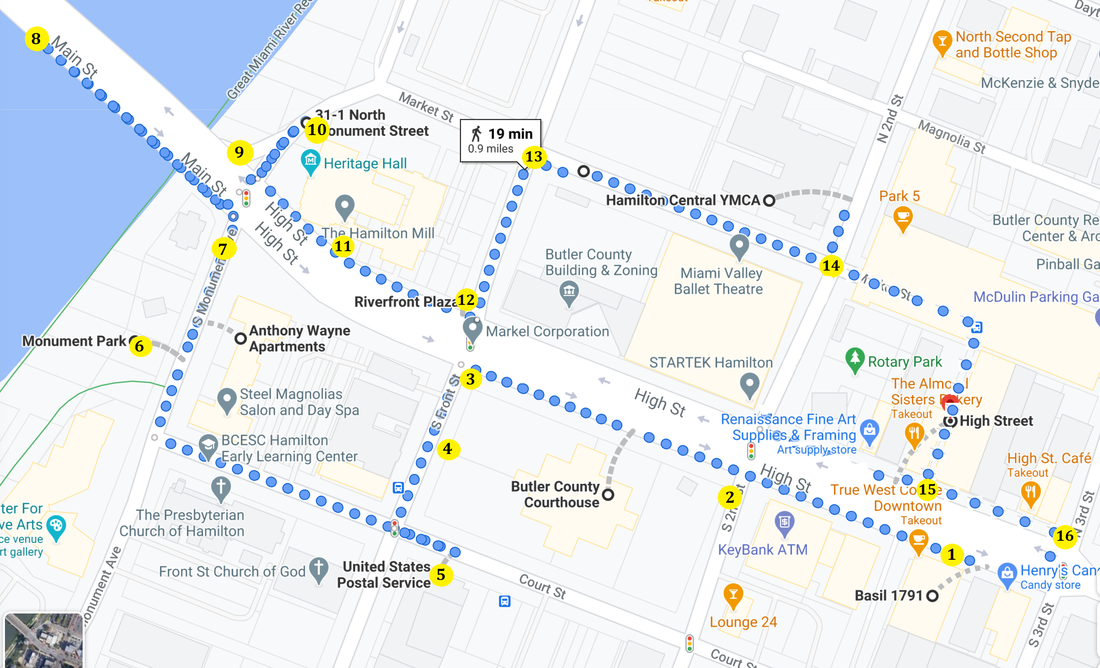 I’m Patrick McBride
We are standing on a sea.
​”Am I late”
This is my brother, Timmy McBride
”It’s Tim”
​”I’m a stagecoach driver, had to hock my ride... ever since the canal came through”
”Does any need to get to Cincinnati? I used to make one trip a day, now I make one trip a week”
​”only God can walk on water”
The mound builders.
​French laid claim to the area. “Have you ever been to France?... Oui”
The Treaty of Paris 1783 gave ownership to the states.
John Cleves Symmes bought the Miami purchase, aka the Miami slaughterhouse
The capital of Ohio? “O”.
Abraham Lincoln speech.
Theodore Roosevelt speech.
Who was Alexander Hamilton. “Singer”
We’re going to tell you the history of Hamilton, but out of order. Hopefully by the end you understand why we are the the way we are. Let’s walk towards the cities origin. “Oregon is a long walk”
Rutherford B Hayes office
​“In a furniture store?”
Rutherford B. Hayes - defends 8 year old
”I remember her... about this tall?”
What is missing from the courthouse?
Mass transit and the interurban. “I’d get on a stage coach”.
The Presbyterian Church 1818
Basin Street and the Miami Erie Canal.
Murals in the post office. The seam contrived.
Where was the Cincinnati Brewing Company? “I have the last bottle”. 400 barrels a day.
City of Sculpture.
The pioneer house. Before 1804. SW corner of Park and D. “Probably not a house”
What stood here?
The forts first Commandant, Capt. John Armstrong, noted that in all his travel he’s never been to a more desirable spot.
”This was the edge of the known world” “The Wild West was over there”
General St. Claire’s defeat. “oops... Gov. General St. Clair”
Little Turtle - Nice guy or mean guy?
Treaty of Greenville 1795.
Fertile Land
Harrison Land Act of 1800 - Land went for $2 an acre
Rev. War land grants
Mad Anthony Wayne “I have a key”
​General James Wilkinson was on the Spanish payroll?! 2nd in command after Anthony Wayne. The house in Fort Hamilton was called Wilkinson’s Quarters. In 1796 he was the highest ranking officer in the US Army.
He had questionable motives. Later he became an Aaron Burr confidant but actually became the lead witness in Burrs trial where he was acquitted.
After treaty Indians came to trade
Stop at Visitors Center for bathroom and free Hamilton water.
The bridges - 5 total, the first in 1819
The arch of the bridge is the result of trying to preserve the look and feel of the old bridge
Double Covered bridge (my shotgun)
Suspension bridge (my stagecoach)
Nations longest single iron span truss (my grandma has a large iron)
​Two Concrete bridges
First there were two ferries.
”I don’t think they like to be called ferries. Where were they going?”
1913 Flood
People stranded on one side
​Bridge in Venice
Rossville.
​Flatboats - New Orleans was still owned by Spain after 1763.
Semler Mill
​Champion Paper
The Ford Motor Co. “Henry Ford was the largest land owner in Butler County”. 1,500 acres. The plant produced 14,000 wheels every day.
For it’s size, Hamilton was the most industrious city in the world.
Henry Ford Museum. “Half the stuff came from Hamilton”. He thought he was going to have to travel the world. He just cane here.
The railroad bridge
William Dean Howell, The Canal.
The drinking fountain
Robert McCloskey - stop in the Mueller
The donut machine.
​The hydraulic 1841 and Market St.
This made for ample industrial opportunities
List the companies in Hamilton
Mention Mosler Safe and the the Declaration of Independence and Bill of Rights are housed in Mosler safes. “I saw that in the movie National Treasure”
Municipal Brewery - “Fill up my bottle”
Riversedge
St. Stephens “Funded by the Presbyterians”
St. Mary’s “Funded by the Germans”
YWCA - Example of Architecture
Third Street - 127 - Main Highway
Dancing Sculpture at Market and Third.
8 Theatres in 1923. “Still have 8 theatres”
The Globe Opera House across the street.